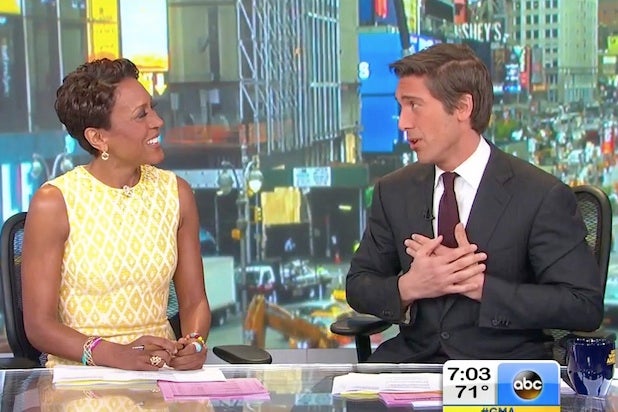 David Muir said he was extremely moved by the news of his promotion to anchor of ABC’s “World News,” and thanked his ABC News colleagues on “Good Morning America.”

“This is going to be the chief of ‘World News’ right here, David Muir,” co-host Robin Roberts said to applause. He will replace Diane Sawyer, who is focusing more on in-depth stories.

“He is taking over now,” Roberts added. “I think they approve. The anchor of ‘World News’ and the managing editor, as well, starting in September. Big congratulations to you and Diane (Sawyer) is as happy as can be. She will be pursuing the in-depth innovative reporting she loves bringing. She’ll have specials and in-depth interviews. She is excited about this chapter for her.”

“You sat next to her here at ‘GMA.’ I’ve been with her in the field at ‘World News’ and she’s been euphoric about this adventure for her,” Muir said. “And I just want to say, thank you for that unbelievable — I’m going to come back tomorrow. The viewers have been amazing in the last 24 hours. I’ve been overwhelmed. As you know, Robin, I have never forgotten that first call from Peter Jennings out in the field as a correspondent here more than a decade ago. And Charlie Gibson reached out yesterday. You did, and Diane, in just in incredible ways. Thank you, I’m honored to be next to you.”

Robin Roberts suggested they break out singing Sister Sledge’s “We Are Family.”