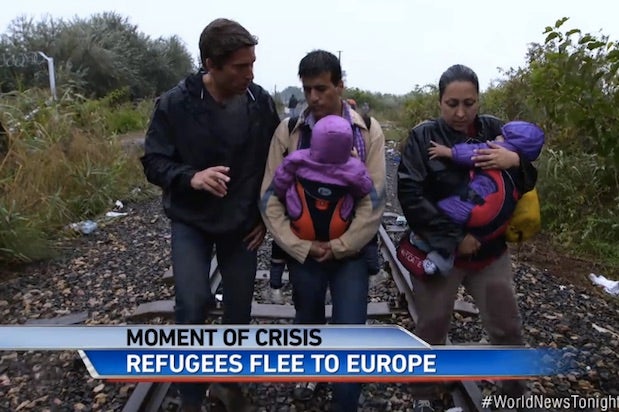 For the second time in a year, ABC’s David Muir reported from the front lines of the Syrian refugee crisis on Thursday.

“Overnight, we were right there, where out of the darkness, the faces emerged,” Muir said while reporting from refugee sites in Hungary, where he described people traveling on railroad tracks that enter Hungary from Serbia.

Muir reported on the hundreds of thousands escaping war-torn Syria, only to be told they’re not wanted by Hungary.

Also Read: David Muir on Why He'll Never Abandon His Reporting Roots: 'I'm Not Some Guy in a Suit'

The ABC News anchor spoke to a mechanical engineer who escaped Damascus and has been traveling for one month with his wife and two children in a crowded boat across the Mediterranean Sea. Muir caught up with the young family later in his report, who had their first hot meal in a month.

“Even as you stand here in a field of mud and rain, you are happy?” he asked the family. They responded: “Yes.”

“This is one of the most important stories of our generation,” ABC News president James Goldston said about the network’s coverage of the refugee crisis, which has seen over 350,000 people flee Syria for Europe.

“We hope to give our viewers a deeper look into what it is like to be torn from your community in the face of devastating war and to give voice to the refugees who feel they have no other option but to put their lives in danger to save themselves and their families. This day of special programming continues our commitment to cover this story now and into the many days ahead.”

In 2014, Muir reported from the Syrian border on a young refugee.