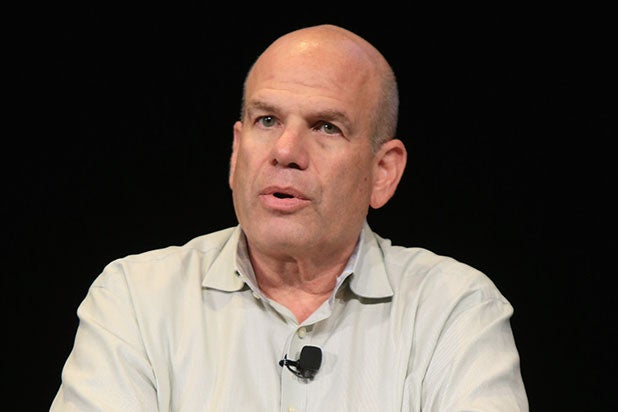 David Simon lashed out on Twitter on Thursday, following news that five people had been killed in a shooting at the newsroom of Maryland’s Capital Gazette newspaper, saying that friends of his had still not been accounted for hours after the shooting.

Simon, who prior to creating the HBO series “The Wire and “The Deuce” worked as a journalist at the Baltimore Sun, took a dig at Donald Trump, a frequent critic of the news media, after the shooting.

Simon posted a tweet from Trump reading, “The FAKE NEWS media (failing @nytimes, @NBCNews, @ABC, @CBS, @CNN) is not my enemy, it is the enemy of the American People!”

“Blood today in an American newsroom,” Simon wrote in response to the tweet. “Aren’t you proud, you vile, fascist son of a b—-.”

Simon was subsequently called out by a number of Twitter users who believed he had politicized the shooting, but Simon wasn’t swayed.

“F— you. A friend of mine has not reported safe. F— you to hell,” Simon responded to one detractor.

“Pot Kettle there big fella,” one critic of Simon’s, identified as “Larry the American,” wrote. ” Media creates the hatred and then promotes it.”

“F— you Larry,” read Simon’s response to the critique. “My friend in Annapolis still hasn’t reported safe. You’re no more American than a s—pile. Or if you are, the term has no meaning or value.”

Responding to another Twitter user who said the press had “made themselves public enemies,” Simon wrote, “My friend has still not reported himself in the Capital Newsroom. He is ‘an enemy of the people’ by direct quote from the US President. F— you and everything you think has value, Mr. Dunkin. You’re an apologist for horror.”

Simon later learned that another friend’s whereabouts were also unknown. “Have learned now that two friends from the Annapolis Capital, both of them ‘enemies of the people,’ still have not reported safe. I don’t believe in petitional prayer, but maybe they and their families do. So…” he wrote.

During Thursday’s Twitter vent, Simon went so far as to call out Twitter CEO Jack Dorsey and the social-media platform, pointing out a particularly nasty message lamenting that the shooting had not taken place at CNN.

“Hey, @jack and @twitter, tell your algorithm to go f— itself,” Simon wrote. “I’m on line waiting to learn about two friends in the Annapolis Capital newsroom who haven’t been reported safe and this is what roams free on your s—hole platform:”

Authorities said Thursday that at least five people had died in the shooting.

Maryland Gov. Larry Hogan told reporters during a press conference that there were “several fatalities” stemming from the incident. During the conference, Bill Krampf, acting chief of the Anne Arundel County Police Department, said, “We do have fatalities and we do have serious injuries.”

A suspect in the shooting has been taken into custody.

Blood today in an American newsroom. Aren’t you proud, you vile, fascist son of a bitch. https://t.co/DI1shGj65X

Fuck you Larry. My friend in Annapolis still hasn’t reported safe. You’re no more American than a shitpile. Or if you are, the term has no meaning or value.. https://t.co/0uT4x6bFFW