Has there ever been a "Doctor Who" episode so filled with expectation? A new doctor, a new companion, even a new producer-showrunner (Steven Moffat, who has written some of the most popular episodes over the last few years).

So does the new series live up to  expectations?

"The Eleventh Doctor" ends up in what could only be described as a glorious romp. 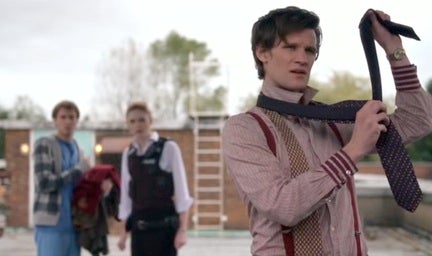 We had already seen Ten (the superb David Tennant) regenerate into Eleven (Matt Smith) at the end of the last series, "The End of Time," so the introduction of Smith as the new Doctor didn’t come as a surprise. But just about everything else did.

The series has a new title sequence — the space wormhole now looks something like a cloudy thunderstorm wormhole — and the opening music has been slowed down in tempo dramatically while still retaining the classic "Who" effects.

There is a crash landing of the TARDIS into a garden shed, a meeting with a young Scottish girl, a crack in a wall, and something named Prisoner Zero. Not to mention the most epic case of the munchies you’re ever likely to see — fish custard anyone? (I wonder how many kids have been asking for that dinner lately?)

Smith, the youngest actor to take on the role, aptly puts to rest any lingering doubts about his ability to handle the role of our favorite time-traveling alien. He’s fast, he’s expressive, and he’s funny while still giving you a glimpse of a slightly darker side.

New companion Amy Pond (Karen Gillan), whom the doctor meets as both a young girl and a young woman, proves charming and — dare I say it? — suitably spunky.

Some things never change, and the Doctor is always either late or early, and he tends to leave people waiting, including the young Amelia (so not nice to dine and dash, Doctor).

The villains in this episode, Prisoner Zero (a moray eel-type creature that can take on the form of comatose people) and the Atraxi (a snowflake featuring a giant eyeball) who are hunting Prisoner Zero, really don’t do much once out of the “crack,” so to speak, but that’s OK, really. The point of this episode is to introduce us to the new Doctor and companion.

However, in true "Doctor Who" fashion, the episode serves up just as many new questions as it answers: What is causing the cracks in the Universe? What do you mean, silence will fall? Who is Amy’s aunt and why is she alone at night? What is the deal with Rory’s hospital badge dates?

I don’t know the answers, but I sure look forward to finding out what’s in store for us, and for the Doctor.

Worst parts: Prisoner Zero didn’t really do all that much once he was “out of the box.” Eleven running around in Ten’s clothes for most of the episode: I was SO glad when he finally changed because it started to distract me after awhile and only made me miss Ten, and that’s not fair to Smith. Plus, the clothes really make the man, and all the more so in the Doctor’s case; it gives you a good hint of what kind of man he will be and I was glad when he “put on” his own look.