“Xena: Warrior Princess” actress Lucy Lawless is among those who have helped to raise over 75,000 New Zealand dollars (about $52,000) for stuntwoman Dayna Grant, who recently injured herself on set and was diagnosed with a need for emergency brain surgery.

Grant is a stuntwoman who has served as a double for Lawless on “Xena” and Charlize Theron in “Mad Max: Fury Road,” as well as working recently on “Wonder Woman 1984,” “Mulan,” the upcoming “Lord of the Rings” series and more. It’s unclear on which production she sustained the injury, and the Daily Mail reports that Grant has worked on four productions and ran a weekend stunt school before she was hurt.

But according to a crowdfunding page created by Grant, she sustained a head injury while on set for an upcoming series/film she was filming in New Zealand. Doctors then informed her that she had been diagnosed with an “8mm aneurysm and upper spinal (neck) injuries” and would be in need of immediate brain surgery. 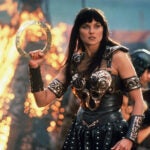 The crowdfunding page says that surgery costs NZ$60,000, and as of writing on Tuesday, the page has already raised over NZ$76,000 dollars.

Lawless since Sunday has been sharing the link to donate and said that she’ll match the donations of any “Xena” or “Ash Vs. Evil Dead” fans who give to the cause. She also shared a photo of herself with Grant from two months prior on set.

“This woman deserves all the love. Put #XenaLove on your donation and I’ll match you,” Lawless said.

Grant also shared a brief, tearful video thanking everyone for their “incredible love and support.”