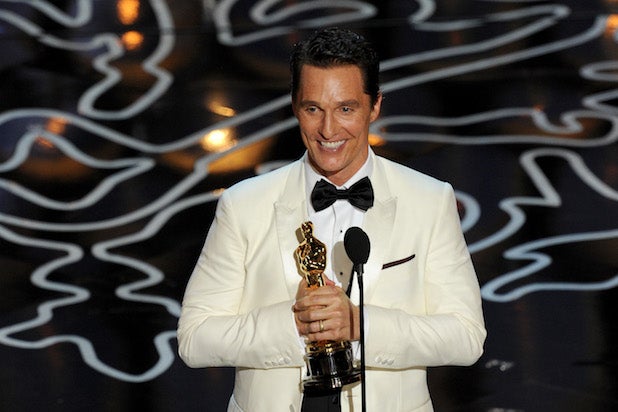 Great eras are often marked by a famous adage. For the Enlightenment Era, just after the Renaissance swept Europe, it was the axiom coined by Descartes: “Cogito, ergo sum” (“I think, therefore I am.”)

For the McConaissance, a period of rebirth for actor Matthew McConaughey, it was a more casual mantra: “Alright, alright, alright.”

McConaughey recited those three words in his acceptance speech at the 2014 Academy Awards for winning Best Actor. It marked the height of the McConaissance, with the actor appearing in critically-acclaimed projects such as “True Detective” and “Dallas Buyers Club,” the latter of which won him the Oscar.

Of course, the origin of the easy-going phrase predates the McConaissance, going back even before the McConaughey rom-com epoch. He first uttered his famous tagline in Richard Linklater’s 1993 coming-of-age film, “Dazed and Confused,” 25 years ago.

Also Read: 'Dazed and Confused' Turns 25: Why Parker Posey Knew Matthew McConaughey Would Be a Star

In 2014, McConaughey told television host George Stroumboulopoulos how the unscripted phrase came about during his “first scene ever on film.”  His character, David Wooderson, was a suave ladies man who only had a few lines in the film, but they survived as the most iconic ones.

McConaughey said director Richard Linklater brought him in for a last-minute shoot — the scene was at Top Notch, the fictional hamburger joint in the film, on a Friday night.

The actor said that just before filming the scene, he had been listening to a live recording of The Doors, and in between tracks, Jim Morrison repeated the word “alright” four times. This number became a template for McConaughey’s first lines shot on film.

A semi-important sidenote: Morrison actually says “alright” five times, but we can let it slide.

“So right before we’re about to go, I’m, like, ‘Well, what is Wooderson about?” McConaughey recounted.

“Man, he’s about four things: He’s about his car, he’s about getting high, he’s about rock n’ roll, and picking up chicks,” the actor said he thought to himself. “And I go, ‘I’m in my car, I’m high as a kite, I’m listening to rock ‘n’ roll… Action! And there’s the chick — alright, alright, alright. Three out of four.”

To break it down, McConaughey clarified that his triple “alright” referred to the three things his character already had — a car, music and a nice high. The last one, a girl he sees in the distance, is the missing fourth.

The line has since stuck with him, and it seems like he’s the only person who could earnestly burble the phrase — whether wearing a matted-down ’70s ‘do or a stark white tuxedo jacket — without making a fool of themselves. He closed out his aforementioned Oscars speech with it, slipped it into his 2014 Golden Globes speech, his 2014 Critics Choice Award speech, his 2014 Independent Spirit Awards Speech, and… you know what, someone already did the hard work for us and made a supercut of every “alright, alright, alright” they could find.