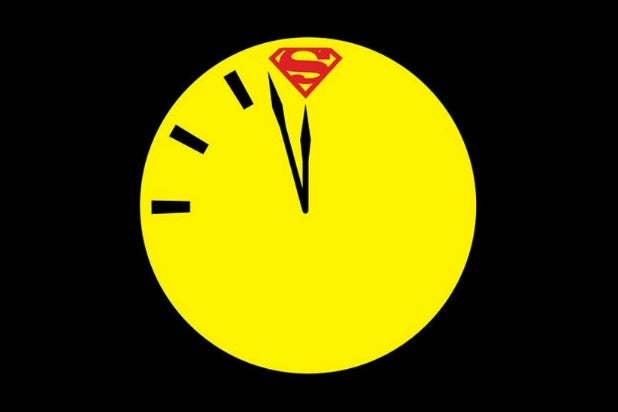 DC Entertainment president Geoff Johns has shared the first look at the cover for the first issue of DC Comics upcoming “Doomsday Clock” event — and it features a moving image of Rorschach’s inkblot taking on the logos of Batman, Superman and Wonder Woman.

“FIRST LOOK! #DoomsdayClock #1 has what I think is the coolest lenticular cover ever,” tweeted Johns. The cover is a reused bit of Rorschach art from “Watchmen” co-creator Dave Gibbons, updated with the patterns on his mask shifting into the logos.

What is a lenticular cover? According to Heritage Auctions, the world’s largest collectibles auctioneer, “lenticular covers” or “flicker covers” are comic-book covers overlaid with a ridged plastic sheet so that the special artwork underneath appears to move when the cover is tilted at different angles. The covers were all the rage in the early 1990s and have been making a comeback as of late.

“Doomsday Clock”  is a 12-issue story, just like the original “Watchmen,” and the first issue will be out this Thanksgiving. After stepping away from writing comics to focus on his duties shaping DC Entertainment’s movie slate, Johns is returning to writing comics with the 12-part mini-series “Doomsday Clock.”

The story, spun out of last year’s DC Rebirth Special, shows a meeting of Superman and Watchmen’s Dr. Manhattan.

During last July’s San Diego Comic Con panel spotlighting his career, Johns explained that the story “takes place a year in the future of the DC Universe, so that when the last issue comes out, the DC Universe will catch up.”

“Everything from Rebirth and Metal and everything else, this will take place after all of that, and by the time issue #12 comes out, the rest of the DC Universe will catch up and be affected. You’ll see some changes to characters in this that you’ll see unfold and you’ll see events happen in the DC line that will then catch up to what we’re doing,” added Johns.