Hard to tell if it’s a sign of the times that the life-sized Obama stand-ups at Dulles airport have been dropped in price from $40 to $9.99.

Then again, it does seem that after six months in office, the president has hit a patch that might be described as the doldrums. 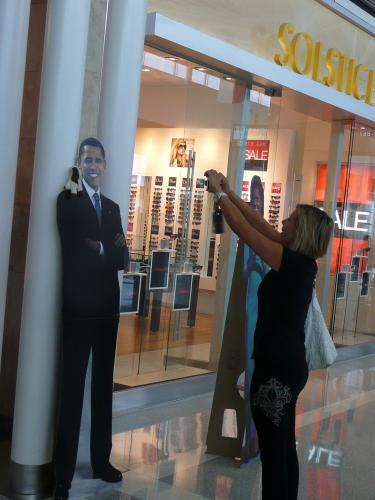 For the man with near-perfect political pitch, Obama uncharacteristically stuck his foot in his mouth last week, with the Henry Louis Gates incident.

He’s done so at the very moment where he most needs our attention, as he takes on his most difficult challenge thus far and probably the most important goal he’ll set for himself – health care reform.

But it ain’t going to be easy.

The bully pulpit is not so easily wielded in an age where cable news channels spend all their time spinning left or right.

And Obama is learning that just because he says something, it doesn’t necessarily  lead the news.

Here’s what happens out here in the rest of the country when we hear the words "health care": click. (What’s on Larry King? Oh, thank God … Michael Jackson’s former publicist.)

Between the news media, entertainment media and the blogosphere, it is harder than ever for the president to cut through the noise and say something comprehensible about a subject inherently complicated and, face it folks — boring.

This week it came home to roost in my community. A well-respected director of admissions at my daughter’s high school, Beatrice Levavi, died suddenly this week.

She was diagnosed with cancer. Last Wednesday.

Beatrice was in her mid-50s, and was the single source of support for her family.

She’d worked her entire life to put seven children through school, and college.

She was laid off from the school last year.

She had no health insurance.

But most of us had no reason to watch Obama hold a town hall this week on health care. I didn’t.

One thing the president has going for him is the continued disarray among his opponents. The Republicans seem ever more out of touch, what with their ‘birther’ absurdities, the comic relief of Sarah Palin and thus-far scattershot critics of the Democrats’ health plan.

But I wouldn’t count on the president’s opponents staying disorganized for long. In fact, if there’s one thing that might organize them, it’s the laser-like interest of the health care conglomerates.

Out here in the rest of the country, Obama just feels overexposed and out of focus.

If he could recreate the direct conversation he established with the country during the campaign, he’d have a better chance of breaking through.

And then more folks might want to take their picture next to his stand-up. You can borrow mine; I snagged it in DC for a song.