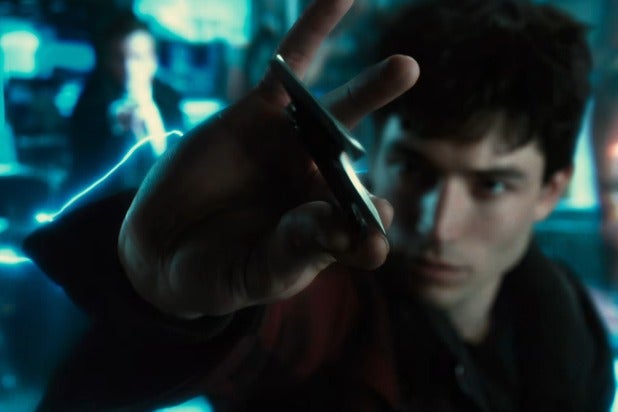 Warner Bros. has settled on a title and concept for its upcoming movie about DC Comics superhero “The Flash,” starring Ezra Miller in the title role: “Flashpoint,” based on the 2011 DC Comics miniseries of the same name.

The new direction discards previous concepts considered for the “Justice League” spinoff, individuals with knowledge of the plan told TheWrap.

The reveal was made with a title card included as part of the DC Entertainment sizzle reel during the Warner Bros. Hall H panel at Comic-Con 2017.

Written by DC Entertainment President and CCO Geoff Johns, the “Flashpoint” comics storyline sees Barry Allen/The Flash travel back in time to avert the murder of his mother. However, when he returns to the present, his mother is still alive but the world is a nightmare, the Justice League doesn’t exist, and Barry must do everything he can to set things right… or as close to right as possible.

Published in 2011, “Flashpoint” served as a total continuity reboot for the DC Comics universe, setting up “The New 52” continuity that influenced the DC Extended Universe of films beginning with 2013’s “Man of Steel.” The “New 52” was itself rebooted in 2016 in favor DC’s current “Rebirth,” which restored the DC universe to a version similar to the pre-“New 52” continuity.

The decision to adapt “Flashpoint” also reflects the close involvement of DC Entertainment President and CCO Geoff Johns, who since 2016 has served at WB as co-master of the DC Extended Universe film franchise.

“Flashpoint” was previously adapted as the 2013 animated movie “Justice League: The Flashpoint Paradox,” and loosely for the second and third season CW’s live-action series “The Flash.”

The extent to which the film will hold to the comics storyline is not known at this time.

“The Flash” was previously being developed based on a treatment by Phil Lord and Chris Miller, and a script by Seth Grahame-Smith, who was set to write and direct before dropping out over “creative differences” in April of 2016. The film does not currently have a director or a release date.