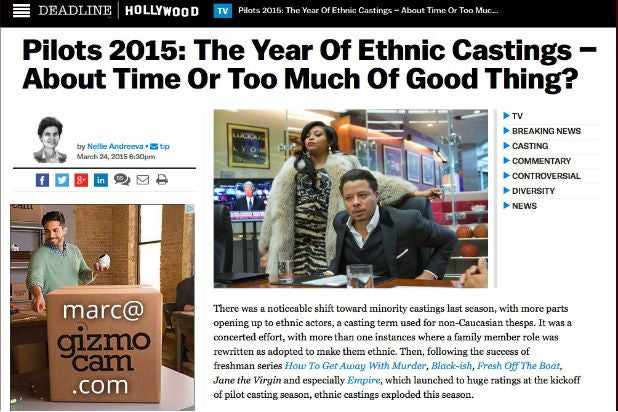 A controversial Deadline article by co-editor-in-chief Nellie Andreeva that pondered whether Hollywood had gone too far with diversity casting is under fire from a coalition of Latino, African American, Asian American and Native American groups.

In a statement on Wednesday, the American Indians in Film and Television, Asian Pacific American Media Coalition, NAACP Hollywood Bureau, and National Hispanic Media Coalition joined together to say that the article is inaccurate, “patently offensive,” and shows Hollywood prejudices.

Read the statement below:

“Shame on Deadline for giving a platform to the prejudices of a few Hollywood agents who, under the cloak of anonymity, revealed themselves to be among the entertainment industry gatekeepers reluctant to change their unfair and exclusionary practices and make way for progress.

“The inaccuracies and misconceptions the article put forth are patently offensive and reflect a larger problem of persisting racial and ethnic bias in the entertainment industry.

“Genuine progress in diversity on television is an extremely recent phenomenon and we applaud recent steps to diversify television in front and behind the camera. For full inclusion to happen, however, the entire industry’s discriminatory business model that has historically pushed out people of color needs to change.”

Additionally, the groups suggested that Deadline take immediate steps to hire more reporters and editors of color and that agencies work harder to represent talented people of color.

Read those suggestions below:

1. Deadline should take immediate steps to hire more reporters and editors of color to broaden its coverage of people of color in the entertainment industry and increase understanding of diversity’s value in the industry.

2. People of color are poorly represented in Hollywood talent agencies. We request meetings with all of the agencies to bring our concerns and talent pools to the table, and help turn this around. Studios and networks have made it clear that diversity is good business, and clearly some agents are looking for talent in the wrong places. We can help.

The article, which went up Tuesday evening, quickly drew a wave of criticism and caused Deadline to trend on Twitter for several hours, for suggesting that after years of too few roles for actors of color in Hollywood, “the pendulum might have swung a bit too far in the opposite direction.” It stated:

Instead of opening the field for actors of any race to compete for any role in a color-blind manner, there has been a significant number of parts designated as ethnic this year, making them off-limits for Caucasian actors, some agents signal. Many pilot characters this year were listed as open to all ethnicities, but when reps would call to inquire about an actor submission, they frequently have been told that only non-Caucasian actors would be considered. “Basically 50% of the roles in a pilot have to be ethnic, and the mandate goes all the way down to guest parts,” one talent representative said.

While they are among the most voracious and loyal TV viewers, African-Americans still represent only 13% of the U.S. population. They were grossly underserved, but now, with shows as Empire, Black-ish, Scandal and HTGAWM on broadcast, Tyler Perry’s fare on OWN and Mara Brock Akil’s series on BET, they have scripted choices, so the growth in that fraction of the TV audience might have reached its peak.

“Scandal” and “How To Get Away With Murder” executive producer Shonda Rhimes, many TV critics and fans weighed in on the article on Tuesday night. On Wednesday, several publications published columns on the article, including The Daily Beast, Slate and Salon.