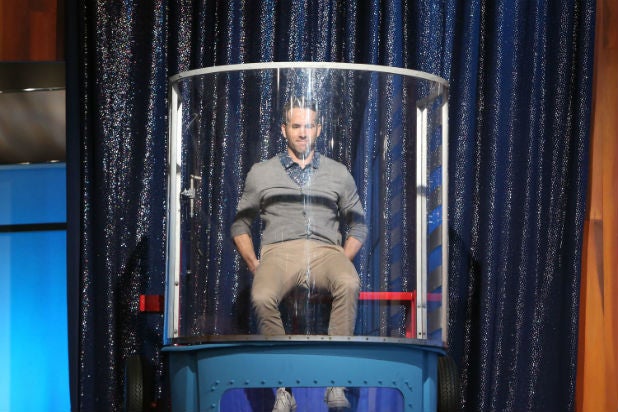 Ryan Reynolds stars in the new blockbuster movie “Deadpool,” but the actor took a dip in a different type of pool during an appearance on “The Ellen DeGeneres Show.”

Reynolds climbed into a dunk tank in order to raise $25,000 for the Make a Wish Foundation on the daytime talk show. DeGeneres needed just three throws to hit the target that sent Reynolds plunging into the tank below. Watch the video below.

Reynolds can no doubt afford to get a little soggy, though. “Deadpool” blew past analyst expectations during its opening weekend, grossing over $280 million worldwide. Not bad considering the film was made for a reported $58 million.

“Deadpool” was the No. 1 box office draw in almost every international market, with the exception of one. It shattered the record for an R-rated movie opening set by “The Matrix Reloaded” in 2003 with $91.7 million.

Reynolds has been itching for a breakout franchise role for years. The backstory of the actor’s keeping the project alive for more than a decade and then getting a break when a leaked scene last year lit up the Internet heightened the film’s appeal to devoted fan boys and struck a chord with casual movie fans as well.