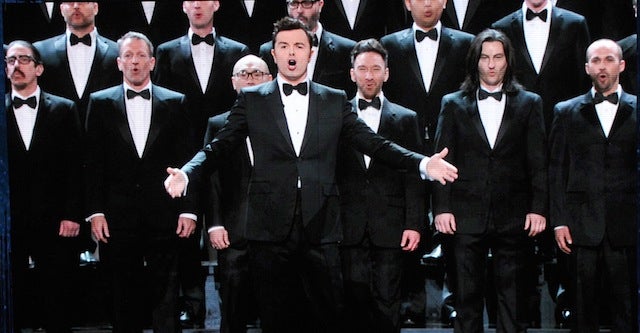 And the Oscar for the most painful opening moments of an Academy Awards ceremony goes to … Sunday night’s telecast.

Rarely has such a high-profile cultural event so boldly and blatantly turned a deaf ear and a blind eye to the female half of the population. In an apparent attempt to reinvent the telecast to appeal to a younger audience, the producers stole a page out of Rupert Murdoch’s playbook, taking the show decidedly down-market.

Within the first 20 minutes of the program, the show’s host, Seth MacFarlane, sang a song called “We Saw Your Boobs” about films in which actresses go topless, demeaned Academy-Award winning actress Sally Field in what can only be described as a bizarre skit in which he impersonated the flying nun and pretended to come on to her, and for the big finish, hoofed with a bevy of dancing girls. Why not make a joke about beating women? Oh wait, MacFarlane did that when he referenced "Django Unchained" as a date movie for Chris Brown and Rihanna. The digs kept on coming, with MacFarlane commenting on how Jessica Chastain’s character in "Zero Dark Thirty" was a typical woman, unable to let anything go.

Also read: Oscars Telecast Review: Guys, It's Not About You

The broadcast made abundantly public what many people working in and around the industry already know. Hollywood has a woman problem. According to the latest Celluloid Ceiling study conducted by the Center for the Study of Women in Television and Film, women comprise a scant 9 percent of directors, 25 percent of producers, 20 percent of editors, 17 percent of executive producers, 15 percent of writers, and 2 percent of cinematographers.

In 2012, a whopping 38 percent of films employed 0 or 1 woman in the above roles. The under-employment of women working behind the scenes translates into fewer roles for women on screen. Female characters account for only 11 percent of protagonists.

What did the latest Academy Awards prove? The Academy’s younger cohort can be just as sexist as the old guard? Any hopes that a new generation might value diversity in ways that the previous generation could not fathom are unfounded, even absurd?

Humor is a display of power. Those telling jokes occupy positions of privilege by commanding our attention and often disparaging members of other social groups. On Sunday evening, Seth MacFarlane, the Oscar production team, and the Academy – a group whose voting membership is 77 percent male — clearly reiterated and reinforced who wields power in the film community.

If MacFarlane had donned a gorilla suit and beat his chest, the message couldn’t have been any clearer. Filmmaking remains a predominantly male pursuit in which men make films featuring mostly male characters for a male audience. The films are then reviewed by a predominantly male community of reviewers and critics, who reinforce the attitudes already held by the mostly male community of Academy voters.

If there were any (gender) justice in the world, special Academy Awards would go to front-row occupants Helen Hunt and Jessica Chastain. These actresses gave the performances of the year when they remained in their seats and wore their best poker faces as MacFarlane tripped through his opening repertoire of jokes proving once again who’s really in charge in Hollywood.