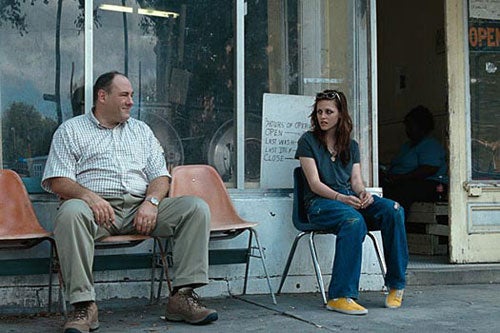 The festival crowds have dispersed, but the dealmaking goes on. A pair of post-Sundance deals were announced in tandem on Friday.

ContentFilm International has acquired international rights to "Welcome to the Rileys," the heavy drama starring James Gandolfini and Kristen Stewart that premiered at Sundance.

The movie about a couple grappling with the death of their daughter also stars Oscar nominee Melissa Leo ("Frozen River").

“I was really taken by the way Jake had crafted this emotional and often funny story about two unlikely, and somewhat lost souls meeting – and then against all odds, saving each other.," ContentFilm International President Jamie Carmichael said in a statement. "And of course the performances are stand out and I’m sure they will be recognised along the way. We know we have something very special in our hands with this film and we’re delighted to be working with Jake, Scott Free and Argonaut Pictures.”

That wasn’t the only fan favorite inking a deal. A week after TheWrap reported that the Weinstein Company had picked up domestic rights to the Amir Bar-Lev documentary "The Tillman Story" for $1 million, the studio made it official. As part of the deal, Weinstein gets North American theatrical, DVD and Pay TV rights, and is also acquiring all rights in English language territories.

The movie documents the life of pro-football star Pat Tillman and the military cover up that surrounded his friendly fire shooting in Afghanistan. It received strong reviews when it premiered last week at Sundance.

"I was blown away by the film when I saw it and I am thrilled to be in business with Bob DeBitetto and Molly Thompson at A&E. John Battsek has made some very successful films and we feel The Tillman Story has great potential, as well, to cross over into mainstream markets. This is a story that will touch, as well as, outrage people and we are honored to bring it a large audience" Harvey Weinstein said in a statement.

Director Bar-Lev is best known for his documentary "My Kid Could Paint That." His latest work was produced by A&E IndieFilms.