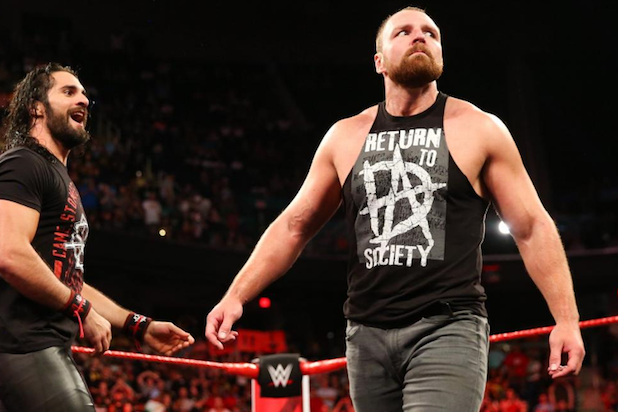 TheWrap has partnered with Canvs, the emotion measurement AI company, for a weekly look at some of the characters and personalities that have TV viewers the most worked up on social media. The data below covers Aug. 8-14 and is drawn from the most emotionally reacted-to television programs, including broadcast, cable, streaming and PPV.

A professional wrestler, the creator/star of  HBO’s “Insecure” and a bachelor in paradise had viewers talking passionately on social media over the past seven days.

USA Network’s recent episode of “WWE Monday Night RAW” scored 46,235 Emotional Reactions (ERs), with professional wrestler Dean Ambrose driving a lot of the emotional conversation. This was his first appearance on WWE programming in months and viewers were psyched for his return. And, of course, there were the requisite comments about his physical appearance.

Seeing Dean Ambrose back on #RAW was the best part of the night!! Can't wait for #SummerSlam to see him back with @WWERollins

Is it just me or did Dean Ambrose just make himself that much hotter by bulking up and cutting his hair. #Raw #WWE #ShieldReunion

#Raw Oh cool, Dean Ambrose is back this can get any better.
Wait he's a total hunk now!!! pic.twitter.com/TETyHgW61J

HBO’s “Insecure” (22,677 ERs) debuted its third season on Sunday, and driving the bulk of emotional discussion was show creator, and main character, Issa. (While the series creator’s real name is Issa Rae, the character’s name is Issa Dee, and fans applauded both in their own right.) People commented happily about the show’s return, while others referred to specific plot points and some even talked about the show’s length (as in, they want more!).

I like that #InsecureHBO can ease my Sunday scaries for a while. It needed to come back. Bless Issa ????

Issa, you asked for the heads up though. You can’t feel al salty now. You should’ve let that Jameson do the talkin. ???? #InscureHBO

These 30-minute episodes gotta go, Issa. We want an hour and we will not settle for anything less. #InsecureHBO #Unsatisfied

Drama abounded during the recent “Bachelor in Paradise” episode on ABC (11,847 ERs), with conversations around Colton — and his not-relationship-relationship with Tia — taking front and center. Some viewers argued on his behalf, insisting that he doesn’t owe Tia anything and is being treated unfairly, while others virtually rolled their eyes at the whole mess and shot insults at Tia.

I’m watching #BachelorInParadise & cringing everytime Tia talks about Colton…..girl, he’s not into you and not worth it

Anyone else feel like this season is totally unfair for Colton!? Not cool #BachelorInParadise #NotCool

Stupid Tia, grow up Colton IS being more honest with you than anyone. YOU just don’t like his answer @BachParadise PS Chris deserves better than rebound. https://t.co/CX59lPzBvu

"Insecure" has some great characters and some not so great -- there's levels to this. Given all the drama that happened in Season 1 and the beginning so Season 2, we've ranked the characters from our most favorite to the ones we don't care for much.