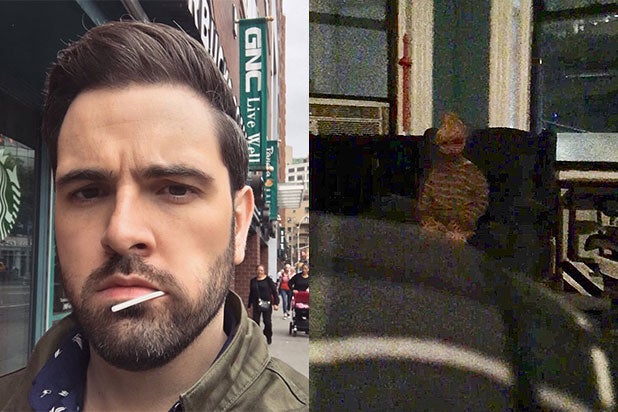 Adam Ellis, the former BuzzFeed writer who just scored a movie deal for his viral social media ghost story, “Dear David,” has answered everyone’s most pressing question: Is it real?

“I’ve never been interested in convincing anyone that ghosts are real — I just wanted to tell my story,” Ellis told TheWrap. “If it was all fiction, I probably would’ve updated more than once every couple weeks.”

On Wednesday, TheWrap exclusively reported that “Dear David” is heading to the big screen. BuzzFeed Studios is partnering on the film with “It” producer Dan Lin’s Rideback.

The film, currently named The Untitled “Dear David” Project, will be a high-concept horror thriller based on Ellis’ tweets and images that started on Aug. 7, 2017, which started with the message: “My apartment is currently being haunted by the ghost of a dead child and he’s trying to kill me.”

Whether the story is true or fake has been long discussed by his more than 1 million Twitter followers and “Dear David” fans. Ellis also told TheWrap that he never expected it to turn into such a discussion — and that he would only update at night so he would have time enough to process what had happened to him.

“I definitely didn’t anticipate any of it,” he said. “The number of film and TV producers who have reached out to me directly has been really staggering, and I’m excited to see my experience translated to the screen.”

TheWrap: The questions of all questions — Was it all real? Or did you believe in a part of it and only then see the potential your story had?

Ellis: I get asked this question multiple times a day and I’ve sort of stopped answering either way. I think when people ask about it on Twitter they’ve already made their mind up one way or the other. I’ve never been interested in convincing anyone that ghosts are real — I just wanted to tell my story. If it was all fiction, I probably would’ve updated more than once every couple weeks!

What was your process? Did you have specific times of the day you would tweet?

There was no process at all. I just updated whenever something would happen. I’d typically update at night since it gave me time to process what was going on (and I also had a day job at the time). I’m well aware that I sort of inadvertently invented Twitter Horror as a genre, but I never had any plan or process. It was just a thing that happened. I never expected it.

What is your response to the haters on your Twitter feed that only want to see Dear David-related posts and threaten to unfollow?

I don’t really engage with haters. If they want to unfollow me because I’m not delivering the specific narrative they require, that’s their prerogative. They can go follow one of the myriad imitators that have popped up in recent months if they need more spooky stories! I’m just trying to live my life.

Did you anticipate the phenomenon you created and now the fact that it’s being made into a movie?

I definitely didn’t anticipate any of it. The number of film and TV producers who have reached out to me directly has been really staggering, and I’m excited to see my experience translated to the screen.

TheWrap’s “Shoot This Now” dedicated an entire episode in February to why “Dear David” should be a movie. You can listen on Apple or right here: