Sony went straight for death and global devastation at its preview in the mammoth Hall H of the San Diego Convention Center … all bridged by Woody Harrelson.

The big draw was director Roland Emmerich’s big-budget tale of the apocalypse, "2012."  But first, "Zombieland" director Ruben Fleischer was up, and he wasted no time in introducing the Comic-Con exclusive trailer. 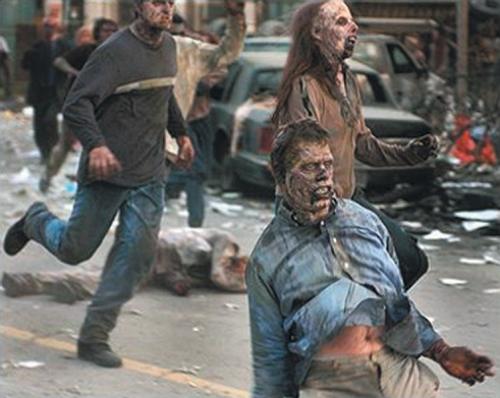 The first scene, with Harrelson, channeling his best psychopath since Mickey Knox in "Natural Born Killers," and picking the theme from "Deliverance" on a banjo, got the thousands in the hall pumped.

The film’s main plotline is Harrelson’s character’s post-apocalyptic search for Twinkies. You can almost hear the pitch: “It’s ‘Shaun of the Dead’ as a coming-of-age road movie.”

You also can almost hear Oliver Stone gnashing his teeth wishing he had come up with the tale of the lone survivors of as a reflection of American society.

And, hypothetical aside, you couldn’t help but be battered by the rolls of laughter and whoops of fanboy joy.

The second clip they showed with Jesse Eisenberg entertaining his frightened ingénue neighbor (actress Amber Heard) in his apartment ends, of course, with her becoming a zombie. Then young-adult hormones turn into a bloody battle to IKEA-furnished death, with a toilet lid providing the coup de grace.

To say the crowd loved it is to have missed out on just how popular zombies and vampires have become in recent years.

As is too often the case at Con, the Q&A got infected by lame questions from the audience like, “Is directing zombies different than regular actors?” and, “What’s your favorite way to kill a zombie?”

Fleisher and the cast played along, but you could see the director perk up when he got a somewhat serious question, one about his inspiration. The bottom line answer, by the way, was the “zombie comedy” of  "Shaun of the Dead"

At one point, someone asked Harrelson, "If you were a zombie, how would you kill me?"

Harrelson answered: "I would kill you whether I were a zombie or not."

Harrelson admitted to some early trepidation about the movie but said that after reading the “absolutely riveting” script, he decided to go for it.  The Oscar nominee — who admitted, as did Eisenberg, that his favorite zombie movie is "28 Days Later" — played the crowd like a pro, getting Robin Williams-sized laughs when he casually referred to "Natural Born Killers" as a “misunderstood romantic comedy.”

Then again, this was a crowd in which one fan had the courage to stand up and admit that "White Men Can’t Jump" was one of his favorite films, so Woody didn’t have to try too hard. 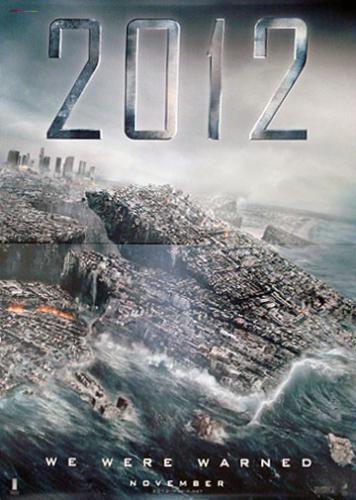 The best question came from a young boy who asked how, with so many zombie movies, you remain original. Fleischer stressed not only the humor of the script, but the quality of the actors, the action and the stunts. It was yet another crowd pleaser.

The end of the panel saw the introduction of a little low budget “indie movie,” as Woody Harrelson, who is in both films, called "2012."

Based on the increasingly circulation Mayan myth that the world will end in 2012, the movie is, as the opening seconds of the trailer that was screened for the crowd, exactly what you would expect from director Roland Emmerich, who also gave us "Independence Day" and the "The Day After Tomorrow."

The director has come out a bit early promoting "2012," admitting that the movie, which is to be released on Nov. 13, isn’t even finished, and he asked the Hall H crowd to be indulgent with his only 70 percent completion.

"2012," too, is globally huge in scale and destruction. Vatican City, the Washington Monument, California and the Eastern Seaboard all come crashing down, and big questions of life, the universe and everything get asked between John Cusack’s panic, Amanda Peet’s wide eyes and President of the United States Danny Glover’s carefully considered strategy for survival.

With all the fireballs and explosions that a budget of $200 million can buy you, it’s no wonder the first question asked of Emmerich was, “Why do you hate this planet so much?”

A fan, dressed as superhero Green Lantern, also asked Emmerich what havoc was going to do wreak next. Emmerich said he wanted to adapt Isaac Asimov’s "The Foundation" — and then “retire.”

The director has come out a bit early promoting "2012," admitting that the movie, which is to be released on Nov. 13, isn’t even finished, and he asked the Hall H crowd to be indulgent with his only 70 percent completion.

Asked by a young girl who won’t be legally allowed to drive until 2013 if the world really ends in 2012, Emmerich offered a ray of hope. The director, who admitted his love of "The Poseidon Adventure" and regular people saving the world, gently told her it would be OK.