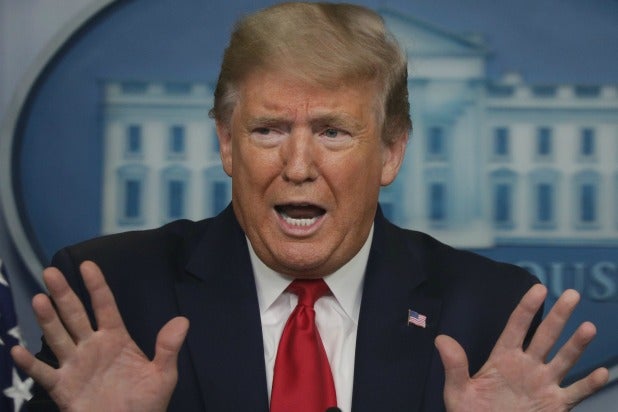 President Donald Trump’s campaign manager Brad Parscale on Thursday compared the president’s re-election effort to the Death Star “firing on all cylinders” at its rivals — which drew immediate confusion and mockery from “Star Wars” fans and political critics.

And sci-fi author Myke Cole noted, “You do know the Death Star is the superweapon of the BAD GUYS, right?”

In the “Star Wars” movie franchise, when the villainous Empire’s Death Star fires on all cylinders, it destroys the planets inhabited by innocents. And the films’ good guys, led by Luke Skywalker and Han Solo, destroy not one, but two iterations of the murderous planet-killer.

That cinematic backstory seems to have been lost on Parscale, who tweeted: “For nearly three years we have been building a juggernaut campaign (Death Star). It is firing on all cylinders. Data, Digital, TV, Political, Surrogates, Coalitions, etc. In a few days we start pressing FIRE for the first time.”

After Twitter users pointed out that the Death Star is, well, evil, Parscale responded, “I didn’t give our campaign the name, Death Star, the media did. However, I am happy to use the analogy. The fact is, we haven’t used it yet. Laugh all you want, we will take the win!”

The threat to press “FIRE” comes days after the campaign tweeted out a mocked-up video of Trump, as Yoda, decapitating two Stormtroopers representing MSNBC and CNN, who were acting under the direction of presumed Democratic nominee Joe Biden. Biden’s face was imposed over that of Emperor Palpatine, who rules over the Empire and, thus, is on the side using the Death Star, making Thursday’s tweet a bit of a reversal for Trump’s campaign. A representative for Disney, which owns the franchise, didn’t respond to a request for comment on that from TheWrap.

This wasn’t the first time the campaign has compared the likely GOP nominee to a movie villain, either. In December 2019, the campaign tweeted a video of the president’s face superimposed on Thanos’ body in the scene from “Avengers: Endgame” right before he’s finally defeated. In the selected clip, Thanos says, “I am inevitable.” In the campaign’s version, Trump’s Thanos then turns House Speaker Nancy Pelosi and other Democrats into dust. Spoiler alert: In the real “Endgame,” Thanos’ plan fails; he’s defeated by Tony Stark with an assist from the other Avengers.

See more of the online reaction to Parscale’s Death Star comparison below.

No Star Wars expert, but doesn’t the Death Star…get blown up? https://t.co/plf7ztTLAV

The Death Star was an expensive failure and, despite that, the Empire built a bigger and more expensive one that also failed.
Here endeth the lesson. https://t.co/1RD4JONJqM

Uh, you know what happened to the Death Star, right? https://t.co/9c7diYPzUJ

Got a fun story for you about what happens to the Death Star https://t.co/vaqUgzq79y

Nicknaming your presidential reelection campaign "Death Star" in the middle of a pandemic that has already killed 70K+ people is an interesting choice https://t.co/2cxIxT70LD

But who was skimming off the Death Star fund to buy a Ferarri, a Range Rover, a $400,000 boat, two million dollar condos and a $2.4 million waterfront house in Fort Lauderdale? https://t.co/cUbJuLteQc

I'm a little rusty on my Star Wars, but the only use of the Death Star was to kill millions of civilians as an act of terror in service of building a fascist republic, right? A little too on the nose.