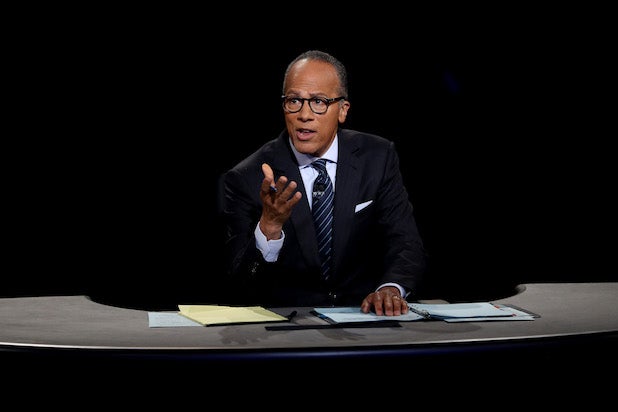 It’s good to have the moderator. NBC handily beat the rest of the Big 4 broadcast competition on debate night, when its Lester Holt presided over the 90-minute Donald Trump-Hillary Clinton argument.

ABC was better than CBS from 9 o’clock to 10:30 p.m. ET — the actual debate time slot — though “The Big Bang Theory” at 8 helped the latter top the former in the overall primetime key demo average, which counts 8-11 o’clock and audience members 18-49-years-old.

The Disney-owned network still took silver in total viewers across the three hours, however. All debate numbers should be considered preliminary and (very) subject to change at this point.

Univision was fifth in ratings with a 0.8/2 and in viewers with 2.1 million.

Telemundo was sixth in ratings with a 0.6/2 and in viewers with 1.7 million. Both Spanish-language nets simulcast the debate.

The CW was seventh in ratings with a 0.3/1 and in viewers with 1 million, airing reruns.