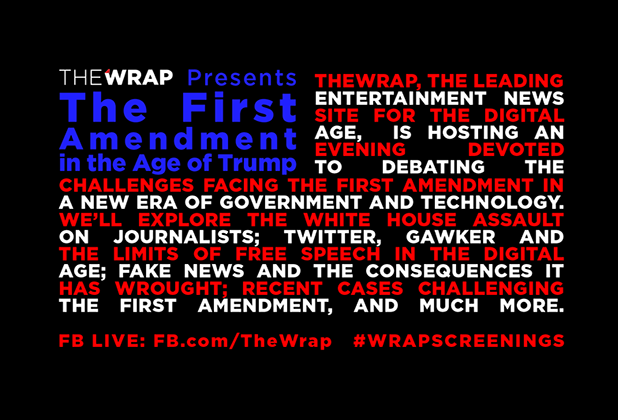 In response to President Trump’s unprecedented assault on the news media, TheWrap is convening an evening event devoted to debating the threats facing the First Amendment.

On Thursday night this week, TheWrap will hold a screening of “Nobody Speak: Trials of the Free Press,” a documentary film about the Gawker sex tapes trial, followed by a panel discussion among artists and experts about the ongoing threats to free speech in the current climate.

The threat hardly needs to be called out. In an extraordinary week, President Trump personally attacked news anchors on MSNBC while exhorting followers at his rallies to dismiss and deride CNN as “fake news.” Then on Sunday, he continued to stun observers on the right and left by posting a photo-shopped video showing him “wrestling” CNN to the ground in an open attack on the news network.

The president is creating a rising climate of violence toward the news media, and those who deeply believe that free speech is a key pillar of our democracy are expressing concern.

The film explores the invasion of privacy case brought by wrestler Terry Bollea, aka Hulk Hogan against Gawker.com for posting a sex tape of wrestler Bollea. The trial ended with the jury awarding Bollea $140 million, sending the snarky website into bankruptcy. It was later learned that Silicon Valley billionaire Peter Thiel bankrolled Hogan’s lawyers to get revenge on Gawker for a story it had done about the billionaire.

Also Read: President Trump Can't Jail Journalists for Reporting Leaks - Or Can He?

Following the screening, a panel of experts will discuss recent attacks against First Amendment-protected free expression and a free press. The panel will include:

Susan Seager, a media law lecturer at the University of Southern California and First Amendment columnist at TheWrap, will moderate. Wrap editor in chief Sharon Waxman will also join the panel.

For what it’s worth, we did invite Facebook, YouTube, Peter Thiel and CNN, as they are key players in the subjects that will be under discussion. None chose to participate.

Among the subjects that will be explored:

The screening and panel discussion is open to Wrap subscribers and free of charge. You can register and RSVP to the event HERE.