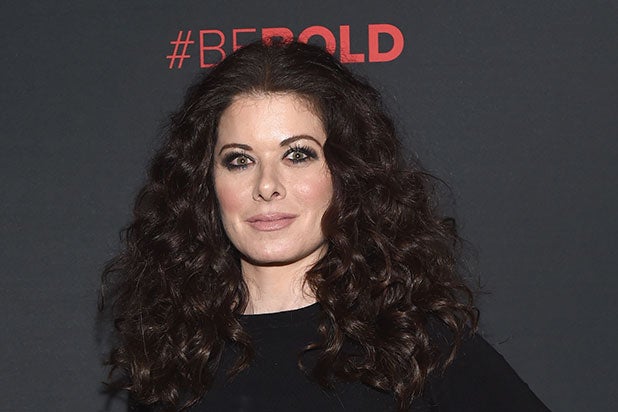 Debra Messing says she was pressured to do a nude scene on her 1995 movie “A Walk in the Clouds” and that she was subjected to a series of body humiliations on set.

At the MAKERS conference in Palos Verdes this week, the actress recounted her time on the set of her first movie which also starred Keanue Reeves and was directed by Alfonso Arau. She began her story by saying that the “a– hat” director once told her that her “nose is ruining my movie.”

“How quickly can we get a plastic surgeon in here?” she says he shouted after ending a scene. “Her nose is ruining my movie! … I can’t do this! Look at this!”

Fox had no comment, and representatives for Arau and Zucker Brothers Productions have not responded to TheWrap’s request for comment. But Arau’s rep told TooFab that the claims are “false” and “inaccurate.”

Messing said she “felt ugly, I felt like garbage, and I felt deep shame.”

The actress said that on the second day of filming, Reeves was supposed to find Messing’s character in bed with another man. Messing says she wasn’t told she would shoot a nude scene and approached Arau about feeling uncomfortable.

“Are you kidding me?” she said he told her. “Your job is to get naked and say the lines, that’s it. You should be grateful to have this part. Get out!”

Messing said she was distraught and ran to the producers, and asked them about why she was told there would be no nudity in the movie.

She said they responded that they promised her no nudity in the domestic release, but not the international release.

Messing said her agents told her, “you can say no and they fire you or you can do it and you keep your job.”

After pondering the situation, Messing decided to do the scene. The director apparently wanted to “set the sheet” when Messing laid down on the bed.

“He lifts it, scans my naked body, then drops the sheet on top of me like a used Kleenex. He walks away without a word,” she explained. In other scenes, she said, he walked around her and told her to cover both her nipple and her “a–.”

“It turns out, after all this trauma, the only part of my body that is seen naked in the film is my back,” she said. “The whole thing was a power play, a game. And the goal, to demean me, to strip me of my power and make me feel on a cellular level his dominance over me.”

She added, “I told my agents I would never work with that a–hole again.”

But that wasn’t the end of it. Later on in her career, Messing said, she was cast on “Will & Grace” and was forced to wear chicken cutlets to bring her bra size up to a C-cup. After wearing them for three weeks, she told the costume designer she didn’t want them anymore because “she looked stupid.”

She said she was told she “had to” because it was in a “note from the president of the network.” After she asked to speak to the president, she never saw those cutlets again, she said.