In “Borat Subsequent Moviefilm,” Sacha Baron Cohen’s Borat spent several days locked down with two ordinary people named Jim and Jerry who spouted conspiracy theories about the coronavirus being manufactured in China and about Hillary Clinton.

But for a new documentary short series called “Debunking Borat,” the “Borat” filmmakers meet up with Jim and Jerry again, and they sit them down with experts who try and debunk the conspiracies they believe and explain the ways they’ve been misled and misinformed. And a first teaser for the series shows that Jim and Jerry even come face to face with none other than Hillary Clinton herself.

“Debunking Borat” is a six-part documentary short special featuring Borat’s two roommates, and each episode focuses on a different idea that they shared with Baron Cohen during the course of the film. Among the conspiracies they hope to debunk are whether the vaccine includes a microchip, whether mail-in ballots were a scam, whether the coronavirus was manufactured in China, whatever is going on with Bill Gates and George Soros, and most of all the Clintons. 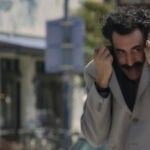 Baron Cohen has said on numerous occasions that he got to know Jim and Jerry well over the five days that he remained quarantined with them, and though they’re friendly people, he observed how they’ve been led down the rabbit hole of conspiracy theories spread through social media. The new special aims to bring them back to reality.

Announced along with “Debunking Borat” is a 40-minute cut of just Borat’s footage with Jim and Jerry at the height of the coronavirus pandemic called “Borat’s American Lockdown,” as well as a previously announced extended cut of “Borat Subsequent Moviefilm” that includes deleted scenes from the moviefilm. You can see a teaser for that here.

All three specials are dropping on Amazon Prime Video on May 25.