The decision to donate her husband’s face to a man she’d never met in need of one was not done lightly by Susan Whitman. In the space of three excruciating, exhiliarating days, Whitman learned that a donor heart was available for her husband, Joseph Helfgot, who had been waiting for one for more than a year. She then learned that he had not survived the transplant surgery, that there was a request to consider organ donation and finally the decision to donate Helfgot’s face to a man who’d been suffering for several years following an industrial accident. 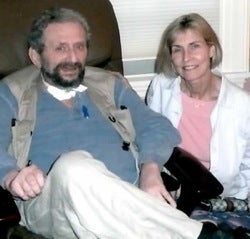 Whitman agreed to discuss the unusual experience in an effort to illuminate the process for a procedure that is still new in America. The successful transplant at Brigham and Women’s Hospital was only the second in the United States.

Helfgot was a prominent Hollywood market researcher, founder and president of the research company, MarketCast.

How did this decision come about?

We’d already been on board for being a donor family. And it was pretty obvious going into surgery — you don’t spend time talking about a worst-case scenario — but I already knew that if something went wrong, something — a liver or kidney or something — would be donated. But there is a difference between donating an internal organ and giving someone’s face. It’s very different.

It is a very profound decision. Can you share your thought process?

When you are stricken with grief at the loss of another and you can give someone else life, it really eases the grief.

Esther Charves from the New England Organ Bank approached us to reinforce the fact that we’d agreed to be a donor. She said, ‘It’s very possible that the heart transplanted into Joseph would be recovered,’ and that would be the first time that would happen.

She only approached you later about the possible facial transplant?

Esther broached it with me on Tuesday. She pulled me aside yet again. She said, "I have another thing to ask you, and don’t think you have to say yes to this. This is a big one." She said she felt comfortable approaching me because she knew I was, unlike other folks, familiar with organ donation. And this was a person who had been waiting for a while. That suggested to me that this was uncharted territory.

It was heavy. I said, "I need to speak to my children." I rounded (them) up, and we talked about it.

It was so fundamentally difficult, and yet fundamentally easy. I felt the way you do when your kids are little and are about to get a tetanus shot: "You know how painful this is going to be, and you won’t understand it on a certain level, but it’s something you have to do." This was something we had to do. How could we not? How could you not let somebody survive?

Joseph was the child of two Holocaust survivors. A piece of us all the way through kept saying — ‘Take that, Hitler. See how tenacious we Jews really are?’

Was it difficult to consider what Joseph himself would have wanted?

That was the first thing. You don’t know. But I believed, and still do, that fundamentally — whether Jewish or Christian — there’s that belief that the body returns to ash, it’s not important, and it’s the soul that endures. If you can give life, it is the ultimate mitzvah.

I did not. Wednesday night I went home, it was quiet, I went to my room. At this point, all this washed over me, I knew all night that my husband was in surgery — it was a 17-hour operation — and then the liver. And you think of your loved one physically being put through this process. It’s tough to go to sleep while you know that’s going on. It’s painful. You want it over, and you want them at peace and at rest. I was relieved when it was over.

That’s what donor families have to endure. Donations sound good on paper, but it is different to go through them. But what an exhiliarating thing on another level. When I saw the press conference on TV, I was elated. I thought: It wasn’t in vain.

Joseph was not ready to go. But this made it a tiny bit bearable.

What would you counsel potential donor families?

What should drive the decision is the wish of the person who is passing on. Having gone through the pain and agony we’ve gone through, from getting that call Saturday night saying we have a heart, and having to go from that high to the low of learning he was brain dead, to go to the high again to know that he would sustain the lives of three other people — all in the space of three days. It’s so powerful.

In the end, Joseph was a very just man. That’s the thing — he and his kids are just. That’s who we are. This was the just thing to do. Not to do it would have been injustice.

I feel so elated that he will never really be dead. In a way that is different than the memory. Physically he will go on.