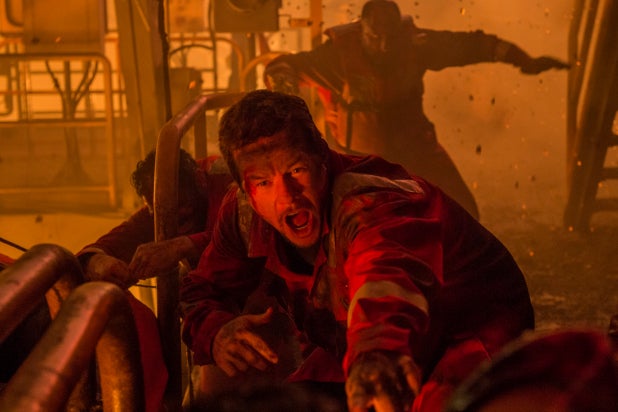 All is well … until it is not. As day turns to night, the rig’s defense system collapses, erupting into flames. The result is an explosion that kills 11 people. Moreover, it proved to be the biggest petroleum spill in this country’s history.

The film recounts that fateful night — which actually transpired on the Deepwater Horizon in the Gulf of Mexico on April 20, 2010 — through the eyes of Mike as he attempts to save both his own life and those of his cremates, all of whom seemingly have families frantically awaiting them at home.

Directed by Peter Berg, “Deepwater Horizon” is a movie about ordinary people doing extraordinary things. In turn, Berg depicts these horrifying moments with big-budget intensity. Rigs are obliterated while characters are trapped in a situation that requires more than just bravery. It requires a will to live in the face of death.

In this regard, “Deepwater Horizon” does what it sets out to do. Mike and company (which include characters played by Kurt Russell, Gina Rodriguez and John Malkovich) are rendered powerful and courageous. Each symbolic of the type of character it takes to make it through this horrifying man-made disaster.

However, moving beyond the its basic qualities, the whole movie’s existence is politically, morally and ideologically vexing.

A truncated breakdown: the film is backed by Participant Media and Lionsgate’s Summit unit. The former being a production company whose mission statement insists its dedication “to entertainment that inspires and compels social change.” For a company that is in the business of making films that last part (“compels socials change”) may sound funny. That’s because its purpose is a bit peculiar.

When it comes to “Deepwater Horizon,” Participant and Lionsgate are aiming to both simultaneously profit from this venture and give back to the ravaged community it’s profiting from. After an online petition begging the film to “donate a share of its proceeds to nonprofit organizations working on the oil-spill clean-up,” the powers that be conceded. While the details of the studio’s generosity remain nebulous, a good deed has been done. Well, kind of.

None of this is — on the surface — apparent while watching Berg’s action blockbuster. It’s a thrilling film with impressive set pieces, solid acting and a pulse-pounding climax. Movie-wise, mission mostly accomplished. But to experience “Deepwater Horizon” and ignore the external circumstances surrounding its creation is a difficult task. Movies don’t inhabit insular bubbles. They are not detached from reality — they are created by it.

And as such, there’s something unseemly about “Deepwater Horizon,” a film from the guy who made “Battleship.” It was more amusing when Berg brought a childhood board game to the big screen, mainly, because that was a game. What happened on April 20, 2010, in the Gulf of Mexico was not.

Before the film’s premiere at the Toronto International Film Festival, Berg spoke of the survivors who remain in Louisiana and Alabama. The film is “dedicated to them,” he insists. But nothing in what appears during the movie’s 107-minute running time seems to truly honor those whose lives were irreversibly altered during this national tragedy.

You know what I see? A movie, coming soon to a theater near you.

In the coming weeks, I hope to be proven wildly wrong by the film’s theatrical release. The true success of “Deepwater Horizon” should not be measured by its box office numbers, but by its ability to raise awareness about those affected by the spill. While art as activism is dangerous, so too is a movie profiting off the pain of others. Even if it is entertaining.