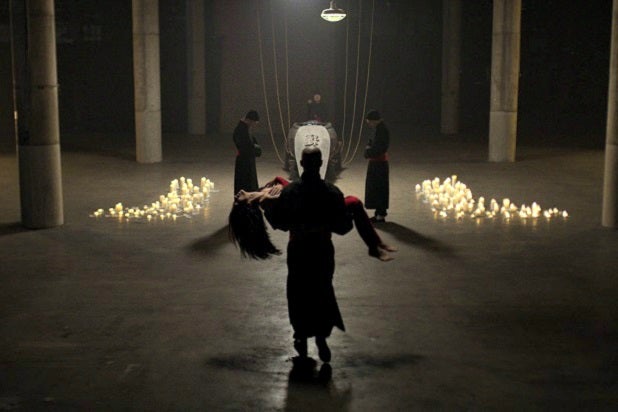 (Note: This post contains some spoilers for “Marvel’s Daredevil” Season 2 and early episodes of “The Defenders.”)

In the early episodes of Netflix and Marvel’s “The Defenders” show, the heroes from Netflix’s other Marvel shows slowly find themselves all fighting the same battle. And all of them keep running up against the same super-strong fighter, and none of them can beat her alone.

That villain is the ultimate weapon of The Hand, the bad guy organization that’s been behind a lot of the evil stuff going on around New York throughout all four Netflix Marvel series so far. Known as the Black Sky, the weapon, and The Hand itself, was a major part of the second season of “Daredevil.”

Also Read: “The Defenders”: What is K’un-Lun? A Quick Explainer of the Heavenly, Mystical City

The Black Sky first came up in Season 2 of “Daredevil,” when Matt Murdock (Charlie Cox) discovered that The Hand was behind a lot of the criminal activity he’d been dealing with throughout the series. The organization, which was able to deploy a ton of ninjas and other bad guys to try to stop Daredevil, was working on creating the Black Sky — a person turned into a living weapon.

In “Daredevil,” the Black Sky is treated as an almost religious figure that The Hand worships, and many in the organization seem to think the person who becomes the Black Sky will lead them. The Hand first tries to turn a child into the Black Sky, but Matt’s mentor, Stick (Scott Glenn), kills the kid.

Fans will remember from the end of “Daredevil” Season 2, however, that The Hand eventually does manage to create the Black Sky. In the final battle with bad guys in the season, Elektra (Elodie Yung), another warrior Stick mentored (and Matt’s love interest), is killed. The last thing fans are shown in the season is The Hand loading her body into a strange sarcophagus to turn her into the Black Sky.

Also Read: ‘Iron Fist': What Exactly Is Up With Madame Gao, Villainous Leader of The Hand?

In “The Defenders,” we find out what that was all about. Elektra is, in fact, the Black Sky, and The Hand has worked to remove her memories of her former life. She’s a powerful fighter who seems to be super-strong, fast and resilient. She repeatedly fights, and beats, the heroes who make up the Defenders, and she serves The Hand’s leader, Alexandra (Sigourney Weaver) with almost-unflinching loyalty.

Not everybody in The Hand believes in the Black Sky in “The Defenders,” however. Alexandra uses her more like a tool than a prophesied leader, making her sort of the Iron Fist of The Hand — a living weapon used to destroy their adversaries. Since The Hand’s members were exiled from the mystical city of K’un-Lun that turned Danny Rand into the Iron Fist, the parallel makes sense.

Even though she might not be the magical, ultimate power The Hand seems to think she will be in “Daredevil” Season 2, it’s clear that Elektra as the Black Sky is still a formidable, frightening adversary. Throughout the series, the only way the heroes of “The Defenders” have a chance against her is if they work together.