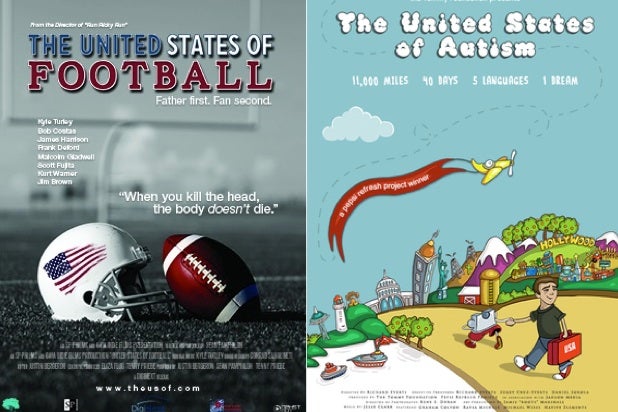 Which musicians were the subject of the best documentary — background singers, a white rhythm section from Alabama, a Russian punk band, a legendary songwriter from Brooklyn or a Filipino Journey fan who became the band’s lead singer?

Those are some of the questions raised by the formidable list of 151 documentaries that qualified for the Oscar in the Best Documentary Feature category this year, a record total 20 percent more than the previous record set in 2012.

TheWrap obtained the complete list, which ranges from A to Z — that is, from “The Act of Killing” to “Zipper: Coney Island’s Last Wild Ride” — and from “The Short Game” to “Long Shot,” from “First Comes Love” to “The Last of the Unjust.”

The record number of submissions suggests that while AMPAS rules designed to hurt made-for-TV docs and qualifying programs like the International Documentary Association’s Docu Weeks did have some effect — the IDA discontinued DocuWeeks in favor of its own screening series — they certainly didn’t reduce the number of qualifying films.

More than a dozen of the films are listed as HBO Documentaries on the cable channel’s website, while dozens of others used self-financed qualifying runs to enter the race.

Only about a third of the qualifying films, 53, are listed by Boxoffice Mojo as having had theatrical releases during 2013.

“Last year DocuWeeks received some blame for increasing the number of films that qualified for the Oscar,” International Documentary Association executive director Michael Lumpkin told theWrap. “In hindsight, I see that DocuWeeks probably helped to keep the Academy’s submissions lower, since our qualifying program was curated. Many that didn’t make our program may have decided it wouldn’t be worth going to the trouble and expense to qualify.”

Lumpkin said that 273 films qualified for this year’s IDA Awards, which do not require an Oscar-style qualifying run. That number was about 50 fewer than the previous year, a dropoff he attributed to the move to an in-house submission system after using Withoutabox in previous years.

The Cinema Eye Honors, the other major award for nonfiction films, has 174 eligible films this year, only 55 of which are also on the Oscar list.

The 151 Oscar-qualifying films include movies from directors represented on the Cinema Eye’s recent list of the 25 most influential docs of all time (Frederick Wiseman’s “At Berkeley,” Claude Lanzmann’s “The Last of the Unjust,” Errol Morris’ “The Unknown Known”), and films from Oscar-winning feature-doc directors (Alex Gibney’s “The Armstrong Lie” and “We Steal Secrets”), Oscar-winning short-doc directors (Sean Fine and Andrea Nix Fine’s “Life According to Sam,” Roger Ross Williams’ “God Loves Uganda”) and an Oscar-winning narrative-feature director (Jonathan Demme’s “Enzo Avitabile Music Life”).

Two, “More Than Honey” and “The Missing Picture,” are also submissions in the Best Foreign Language Film category, a two-fer also enjoyed by doc nominee “Pina” two years ago.

Two of the qualifying films, “Sound City” and “More Than Honey,” have 100 percent positive ratings on Rotten Tomatoes, while “20 Feet From Stardom” is at 99 percent, “Blackfish” at 98 percent, “The Act of Killing” and “Call Me Kuchu” at 97 percent, “Cutie and the Boxer” at 96 percent, “Stories We Tell,” “Muscle Shoals” and “We Steal Secrets” at 95 percent.

And, to be honest, a large number of the films don’t have much chance of landing on the shortlist, or even of being seen by enough voters to have a shot.

Members of the Documentary Branch now have screeners of all 151, and have been asked to vote for their five favorites to create a 15-film shortlist that will be revealed in December.

(Note: The list was given to TheWrap by an intermediary, with a few errors in titles that we tried to correct. We can’t find any record of one of the titles, “The Cinema: A Brief History of World Cinema.”)

Here (take a deep breath before jumping in) is the entire list:

Call Me Kuchu
Casting By
CinemAbility
The Cinema: A Brief History of World Cinema
Cooper and Hemingway: The True Gen
The Crash Reel
Cutie and the Boxer

Far Out Isn’t Far Enough: The Tomi Ungerer Story
Fire In The Blood
First Comes Love
First Cousin Once Removed
For No Good Reason
Free Angela Davis and All Political Prisoners
Free China: The Courage to Believe
Free The Mind

Hava Nagila: The Movie
Hawking
Herblock: The Black & The White

I Am Breathing
Inequality For All
Informant
Is The Man Who Is Tall Happy? An Animated Conversation With Noam Chomsky
It’s Better To Jump

The Last of The Unjust
Let The Fire Burn
Letters to Jackie
Leviathan
Life According To Sam
Linsanity
Lion Ark
Liv and Ingmar
Long Shot: The Kevin Laue Story

Married and Counting
Medora
MisLead: America’s Secret Epidemic
The Missing Picture
Mondays With William
Money for Nothing: Inside the Federal Reserve
More Than Honey
Mumia: Long Distance Revolutionary
Murph: The Protector
Muscle Shoals
The Muslims Are Coming!
My Father and the Man in Black

Narco Cultura
The Network
The New Black
99%: The Occupy Wall Street Collaborative Film
No Place on Earth
Not Yet Begun to Fight

One Direction: This is Us
One PM Central Standard Time
Our Nixon

Pad Yatra: A Green Odyssey
Pandora’s Promise
The Paw Project
A Place At The Table
Plimpton! Starring George Plimpton as Himself
The Prime Ministers: The Pioneers
Pussy Riot: A Punk Prayer

Re-emerging: The Jews of Nigeria
Rescue in the Philippines:  Refuge from the Holocaust
Revolution
The Revolutionary Optimists
Rising from Ashes
A River Changes Course
Running From Crazy

Terms and Conditions May Apply
Tim’s Vermeer
The Trials of Muhammad Ali
12 12 12
20 Feet From Stardom
Two: The Story of Roman and Nyro

Walter: Lessons From The World’s Oldest People
Wampler’s Ascent
War on Whistleblowers: Free Press and the National Security State
We Came Home
We Steal Secrets: The Story of WikiLeaks
We The Parents
We Will See Tomorrow
When I Walk
Which Way Is the Front Line From Her? The Life and Time of Tim Hetherington
Why We Ride
Winter Nomads