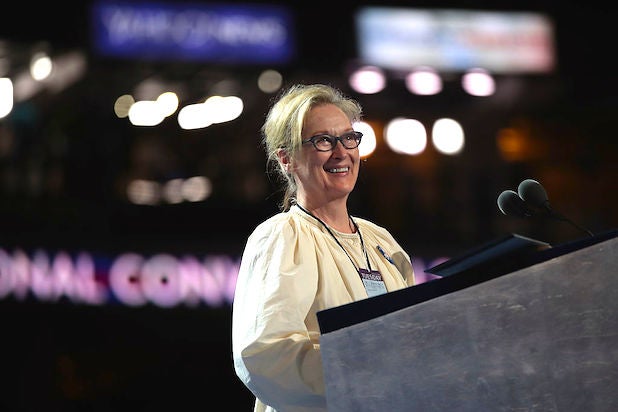 After a rowdy first day which ended with a roaring speech by First Lady Michelle Obama, the Democratic National Convention gets down to business on Tuesday as delegates prepare to make history.

The day will start with a roll call vote as Democrats officially make Hillary Clinton the first female presidential nominee from any major party.

The big speaker of the night is Bill Clinton, delivering his 10th consecutive convention address.

But before the former Commander-in-Chief makes a case for his wife’s presidency, expect some high-caliber Hollywood stars to serve as ratings magnets.

Actress Elizabeth Banks will serve as host for the evening. She will be joined by  a cadre of Clinton celebrity backers, including who plays fictional president Fitzgerald Grant in ABC juggernaut “Scandal;” “Will & Grace” star  “Girls” creator and star   Erika Alexander (“The Cosby Show,” “Living Single”) and, who will introduce a film.  Singers Andra Day and will perform.

Here is the primetime schedule for Day 2, according to the Clinton campaign:

Elizabeth Banks
Host for the evening

FIGHTS OF HER LIFE: KIDS AND FAMILIES

Daniele Mellott
Remarks
Mellott and husband Mark’s adoption of their son was made possible through the 1997 Adoption and Safe Families Act that Hillary championed as First Lady.

Jelani Freeman
Remarks
Freeman grew up in foster care and is a former intern in Hillary Clinton’s Senate office. Since receiving his law degree, he has worked to bring opportunity to kids at risk.

Eagle Academy Principal and Students
Remarks
As a senator, Hillary Clinton supported the creation of the Eagle Academy to educate at-risk youth in New York City.

FIGHTS OF HER LIFE: SOCIAL JUSTICE

FIGHTS OF HER LIFE: WOMEN AND FAMILIES

FIGHTS OF HER LIFE: STANDING UP FOR 9/11 FIRST RESPONDERS & SURVIVORS

Joe Sweeney
Remarks
Sweeney was a detective with the NYPD on September 11, 2001. When the towers were hit, he rushed down to the World Trade Center and began digging through the rubble for survivors.

Lauren Manning
Remarks
Manning spent more than six months in the hospital after 9/11 recovering from severe burns. As senator, Hillary Clinton helped Lauren get the care she needed.

FIGHTS OF HER LIFE: HEALTH CARE

Ryan Moore
Remarks
Ryan has spondyloepiphyseal Dysplasia dwarfism and has known Hillary Clinton since 1994 when they met during the fight for health care reform. Ryan has stayed in contact with Hillary ever since.

FIGHTS OF HER LIFE: SECRETARY OF STATE