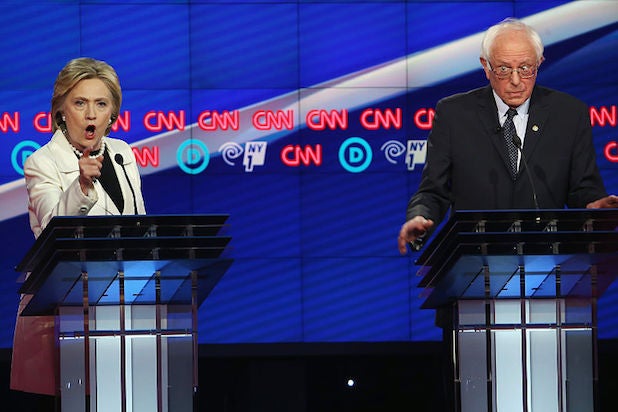 Hillary Clinton and Bernie Sanders came out swinging during the Brooklyn Democratic debate on Thursday just days before New York’s crucial and primary.

The debate aired live on CNN from Brooklyn, New York, and was moderated by Wolf Blitzer

Here are the best zingers from the debate:

Also Read: 5 Things You Didn't See on TV at the CNN Democratic Debate

1. Right off the bat, Clinton took a shot at Texas Sen. Ted Cruz, saying: “We worked hard to really keep New York values at the center of what we are and what we do together.”

2. After being criticized for questioning Clinton’s qualifications, Sanders came prepared with this line: “Does Secretary Clinton have the experience and intelligence to be a president, of course she does, but I do question her judgment. I question a judgment which voted for a war in Iraq, the worst foreign policy blunder in the history of this country.”

3. Clinton responded with this gem: “I’ve been called a lot of things in my life. That was a first.”

4. After Clinton said she will move immediately to break up any financial institution, Sanders had this good one-liner: “She called them out. My goodness, they must have been really crushed by this. And was that before or after you received huge sums of money.”

5. Clinton on Sanders’ struggling to name a specific examples when her bank ties influenced her behavior: “He cannot come up with any example because there is no example.

6. Sanders explained why he hasn’t released his tax returns yet: “Jane [Sanders’ wife] does our taxes. We’ve been a little bit busy lately. You’ll excuse us.”

7. After Sanders finally promised to release his tax returns, he warned voters not to get too excited: “They are very boring tax returns,” the Vermont senator said. “No big money from speeches, no major investments. Unfortunately I remain one of the poorer members of the United States Senate and that’s what that will show.”

8. Sanders questioned Clinton’s promise to raise minimum wage: “I am sure a lot of people are very surprised to learn that you supported raising the minimum wage to 15 bucks an hour.”

9. Asked about his recent criticism of Bill Clinton for defending Hillary Clinton’s use of the term “super predators” in the ’90s to describe some criminals, Sanders killed two birds with one stone: “It was a racist term, everybody knew it was a racist term.”

10. Clinton on climate change: “It’s easy to diagnose the problem. It’s harder to do something about the problem.”