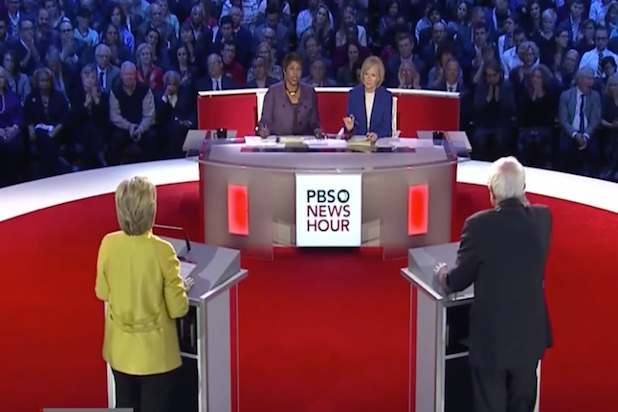 That modest figure ties it with the Dec. 19 version on ABC. Unfortunately, 8.03 million is only good enough to actually beat one out of the 14 debates this primary season: Last week’s Democratic debate No. 5 on MSNBC.

To be fair to the home of Rachel Maddow, had last night’s event only been on one channel, it could have possibly taken over as the new last-place debate thus far. Maybe. Probably not.

CNN actually got more of the split eyeballs on Thursday, landing 4.1 million viewers to the public broadcasting channel’s 3.9 million. The event added another 900,000 audience members via the “NewsHour” livestream.

Last night, Bernie Sanders and Hillary Clinton sparred over President Obama, immigration and Super PACs. It was the sixth Democratic debate of the campaign, but the first since Sanders dominated the New Hampshire primary.

The left-leaning event was moderated by Gwen Ifill and Judy Woodruff from the main campus of the University of Wisconsin-Milwaukee.

Saturday night, the Republicans will take their next turn over on CBS. So, happy Valentine’s Day everyone?