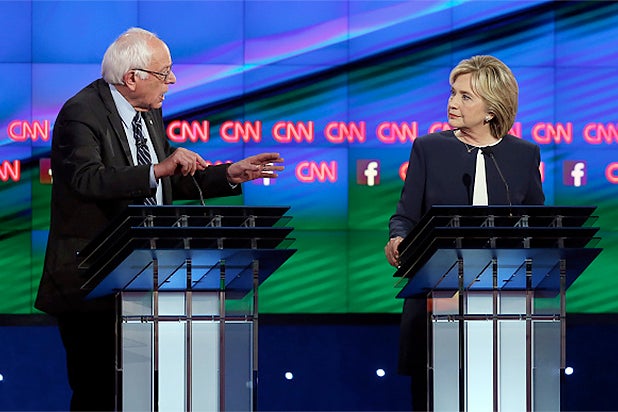 The first Democratic debate on CNN powered it to big, double-digit gains in October.

The debate, which drew 15.3 million viewers and was the highest-rated Democratic debate ever, boosted CNN’s primetime viewership by 101 percent and 59 percent in the advertiser-coveted 25-54 demo year over year.

During the day, CNN was up 23 percent in viewers and 8 percent in demo viewers. Sister network HLN kept up its momentum, increasing double digits in both the total day demo and primetime demo, up 14 and 16 percent, respectively.

MSNBC, without the benefit of a presidential debate, saw double-digit growth in primetime viewers and total day viewers, up 26 percent and 20 percent, respectively.

The “Lean Forward” network saw slight increases in the demo, up 6 percent in primetime and 4 percent during the day.

Fox News remained the No. 1-rated network, narrowly beating CNN by 1,000 viewers in the primetime demo. But the “Fair and Balanced” network remained far ahead in primetime, total day and demo viewers. FNC also ranked third in all of basic cable primetime, trailing ESPN and TBS.

Executives at sister network Fox Business are smiling bright on Tuesday as the network had its highest-rated month ever in October. FBN was up 92 percent in business day viewers compared to 2014, averaging 102,000. “Varney & Company” led the network followed by “Cavuto: Coast to Coast.”

In October, networks were lifted by the continued draw of the presidential campaign, which also included the will-he-or-won’t-he storyline of whether Vice President Joe Biden would jump into the race.

Biden ultimately decided against it in the latter part of the month.