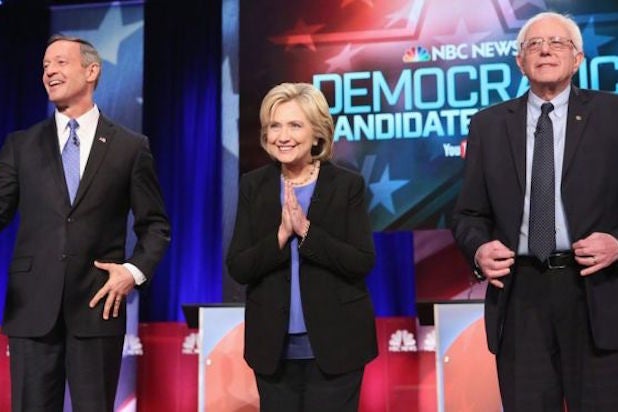 The Democratic debate got heated Sunday as Hillary Clinton and Bernie Sanders vied for advantage in the Iowa caucuses and distant third Martin O’Malley struggled to be heard.

The candidates clashed over guns, health care and Wall Street, and these were the six hardest hits:

“He has voted with the NRA, with the gun lobby numerous times. He voted against the Brady Bill five times. He voted for what we call the Charleston Loophole. He voted for immunity from gunmakers and sellers which the NRA said was the most important piece of gun legislation in 20 years,” Clinton said.

Sanders insisted he had a “D-minus” voting rating from the National Rifle Association and said Clinton’s criticisms have been “very disingenuous.”

“We finally have a path to universal healthcare, we’ve accomplished so much already. I don’t want to see us start over again with a contentious debate. I want us to defend and build the Affordable Care Act and improve it.”

Sanders shot back that Clinton’s claims were “nonsense.”

“I’m on the committee that wrote the Affordable Care Act. … I voted for it. But right now what we have to deal with is that 29 million people still have no health insurance. We are paying the highest prices in the world for prescription drugs and still getting ripped off,” Sanders said.

But Clinton got the soundbite moment.

Also Read: GOP Debate: Donald Trump and Ted Cruz Could Be Running Mates, If They Ever Stop Fighting

Clinton shot back criticizing him for calling Obama “weak” and “disappointing.” She recalled that in 2011, Sanders’ called for a primary challenge against the president.

4. Sanders says he won’t dwell on Clinton, but calls his behavior “deplorable”
Sanders was asked about former president Bill Clinton’s sexual misconduct, and said he found the inquiry annoying because he wants to focus on the issues. But he still worked in a jab.

“Yes, his behavior was deplorable,” Sanders said. “Have I ever once said a word about that issue? No, I have not.”

“If Donald Trump wants to start a registry in our country of people by faith, he can start with me, and I will sign up as one who is totally opposed to his fascist appeals that wants to vilify American Muslims,” said O’Malley.

Asked how she would describe her personal relationship with Vladimir Putin, Clinton said: “Ah, it’s… interesting.”

“We’ve had some very tough dealings with one another,” Clinton went on. “He’s someone you have to continually stand up to because like many bullies, he is somebody who will take as much as he possibly can unless you do.”