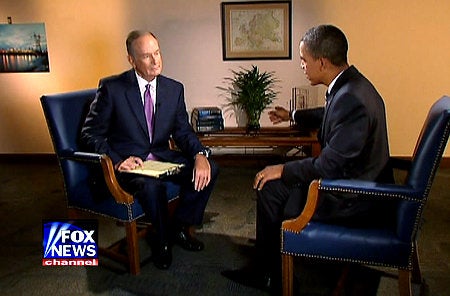 The White House’s renewed war against Fox News continues to rage on – with the administration saying that President Obama won’t appear on the network until at least 2010.

Now MoveOn.org, the lefty political action committee, is urging its 5 million-plus members to tell Hillary Clinton and the rest of the Democratic party to “stay off FOX for as long as he does."

Here’s part of their e-mail:

Now, President Obama is fighting back. The White House communications director said FOX is a "wing of the Republican Party…let’s not pretend they’re a news network." To draw attention to its biased coverage, President Obama will not appear on FOX for the rest of this year.

It’s about time Democrats stood up to FOX! Can you sign this petition asking Democrats to support President Obama’s stance by staying off FOX as long as he does?

Tapper: But that’s a pretty sweeping declaration that they are “not a news organization.” How are they any different from, say –

Tapper: ABC. MSNBC. Univision. I mean how are they any different?

Gibbs: You and I should watch sometime.

“Hundreds of journalists come to work each day at FOX News all deeply committed to their craft. It’s disappointing that the White House would be so dismissive of their fine work and continue their vengeful war against a news organization."

Despite all this, Clemente said on Sunday that "the door remains open" and Fox would "welcome a discussion about the facts behind the issues."

Until then, it seems, the "war" will rage on.