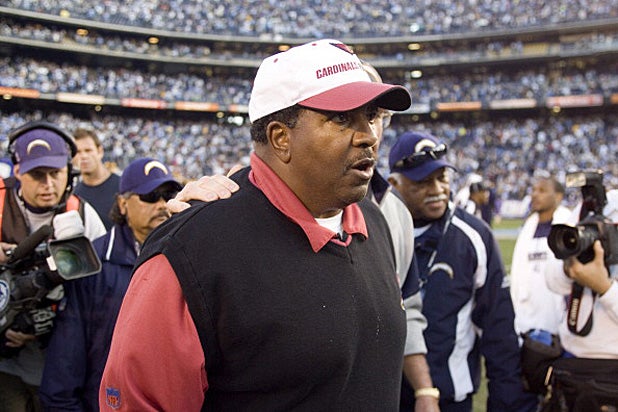 Dennis Green, who was a beloved former head coach of the Minnesota Vikings and Arizona Cardinals during a 13-year NFL career, died Thursday night. He was 67.

“Dennis passed away last night from complications of cardiac arrest,” Green’s family said in a statement, according to ESPN. “His family was by his side and he fought hard.”

Green was only the second African-American head coach both in NCAA Division I-A history (at Northwestern) and in modern NFL history (after Art Shell).

“Denny made his mark in ways far beyond being an outstanding football coach,” the Vikings said in a statement. “He mentored countless players and served as a father figure for the men he coached. Denny founded the Vikings Community Tuesday Program, a critical initiative that is now implemented across the entire NFL. He took great pride in helping assistant coaches advance their careers. His tenure as one of the first African-American head coaches in both college and the NFL was also transformative.”

Born in Harrisburg, Pennsylvania, Green played football for the Iowa Hawkeyes in college and went on to play briefly for the BC Lions of the Canadian Football League. He then turned to coaching in 1981, first at Northwestern and Stanford, then with the San Francisco 49ers, before his historic run with the Vikings.

Upon leaving Minnesota, Green was an analyst at ESPN for two years before he headed to Arizona to coach the Cardinals. His time there is best remembered by fans for his “They are who we thought they were!” explosion after Arizona blew a 20-0 halftime lead to Chicago on “Monday Night Football” in 2006. That rant went on to become part of a Coors Light commercial.

Aside from his gift for viral post-game press conference speeches, Green had a career record of 113-94 and went 4-8 in the playoffs.

He is survived by his wife, Marie, and children Patti, Jeremy, Zach and Vanessa.

See video of Green’s famous speech and messages of condolences on Twitter below.

My heart goes out to family of my former coach Denny Green – we lost a good man way too soon!

Rest in peace Denny. I lost my mother in April, I feel like I just lost father.

Dennis Green was one of the NFL’s most iconic coaches #RIP pic.twitter.com/tUaq8qjomh

Rest In Peace Coach Dennis Green. Cookie & I send our prayers and condolences to his family, friends, former players and the NFL community.

We are saddened over the loss of coach Dennis Green. Our thoughts are with his family.

RIP, Dennis Green, one of the trailblazers for minority coaches in the NFL, and a very good coach. Sad news.

RIP Dennis Green. Please don't remember him for his "rant." Remember him as leader with a rare offensive mind who dared to be great.