Dennis Rodman is bringing the phrase “support act” to a whole new level.

The former NBA star and all-around attention-grabber joined Pearl Jam onstage Monday night, as the band played Chicago’s Wrigley Field, and as it turns out, Pearl Jam singer Eddie Vedder ended up being quite the handful for the NBA alum.

As Vedder and company tore into the track “Black, Red, Yellow,” Rodman — a big fan of the group — took the stage and tossed out a few lines to the crowd.

And then he held Vedder in his arms like the singer was a giant, grungy baby.

The cradle will rock, indeed.

Nice touch, Rodman, but be careful; you don’t want to add a strained back to all those other injuries you’ve experienced.

Watch Rodman and Vedder cuddle up in the video. 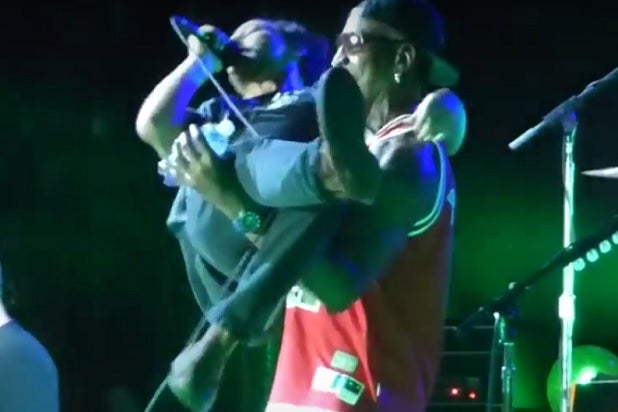