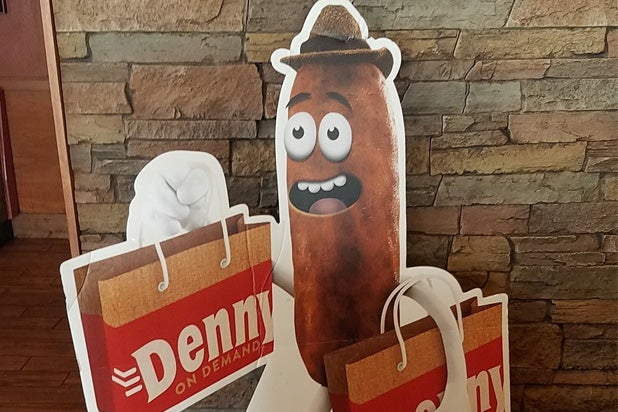 Diner chain Denny’s recently unveiled a new mascot, but alas things did not go as smoothly as hoped. Rather than making a splash, the fedora-wearing cartoon sausage only stunk up the room, its reception blocked up by a torrent of online ridicule over its unfortunate resemblance to (sorry) the end result of eating sausage.

What we’re saying is that many — a great many — jokes were made about how much “Sausage” (that’s his name) looks like… you get the idea.

“The Dennys turd is here with lunch,” said one Twitter user. “I’m not a pro, but I can guarantee I would come up with something better than a turd wearing a hat” said another.

“Sausage” was actually unveiled earlier this summer as part of Denny’s’ anthropomorphic food mascot team “The Grand Slams” (named after the chain’s breakfast dish). The other members of the team are Pancake, Bacon, and Egg, though none of them resemble the output of digestion.

“Who is Sausage? Well, he’s complicated,” the official site says about him. “You see, it’s hard living in the shadow of Bacon, America’s favorite breakfast side. And sometimes his insecurities get the best of him. But we can’t hold that against him. For a guy who can be a little spicy at times, we’s ultimately a good person. Er… food item.”

Good person or not, Twitter was not kind, flocking to point out again and again and again how much he looks like feces, with several noting his resemblance to “South Park” character “Mr. Hanky, the Christmas Poo.” Read on for a sampling.

The Dennys turd is here with lunch pic.twitter.com/uoqLsi2xzt

Thank you @DennysDiner for letting us know what Mr. Hanky does the other 364 days of the year. #Dennysmascot

Looks like Mr. Hanky got a new gig as the Denny's mascot! #MrHanky #DennysMascot #Sausage pic.twitter.com/pKFrgIDSBM

They should embrace it! T-shirts, hats, cartoon spin-off, the whole thing. Will be huge. Go #dennys https://t.co/aPMXJxGDwy

#Dennys new mascot is a turd?
Speaking as someone who is totally average at their job, I'm still better than whoever came up with that

2017 in a nut(heh)shell. Really working on my Photoshop skills. #Dennys #TedCruz pic.twitter.com/xQuUEbMuG7

I'm not a pro, but I can guarantee I would come up with something better than a turd wearing a hat #dennys #turdinafedora #comeon

While everyone else in Westeros is dourly assessing how they'll fight various wars, the Season 7 premiere, “Dragonstone,” found Samwell Tarly working the early days of training to be a maester. The montage of Sam serving soup and cleaning poop was both hilarious and gross, and has inspired all sorts of remixes. Here are a few of the best.