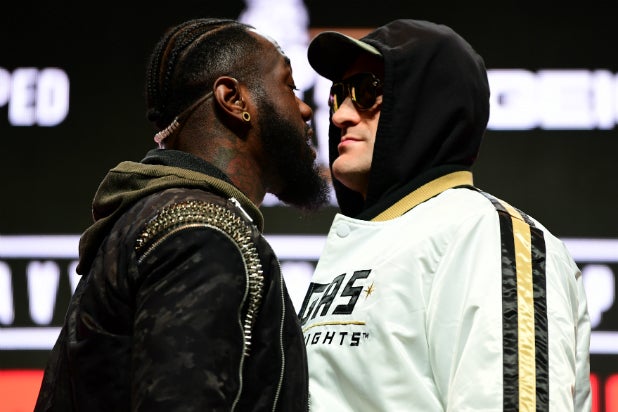 Scoring a boxing match can be pretty confusing for casual fans, but ESPN play-by-play pro Joe Tessitore has an excellent visual method to help those at home keep track of Saturday’s highly anticipated Wilder-Fury II.

Treat your BIC like a polling meter or a focus group dial, he suggested.

“As you’re watching a fight, 10 seconds in: ‘Alright, this guy is controlling pace, my meter turns a little bit to the left. Oh, that guy just had a clean and effective punch, that counts for more, so now I’m leaning to the right,” Tessitore played it out for us. “Oh, he had another another clean and effective punch, I lean more to the right. Oh, at the minute mark, I don’t like what he’s doing there, I lean back to the center a little bit.'”

We can handle that.

Tessitore would like to see a little more of that 10-8 scoring, he said, even without a knockdown having taken place. (“The rule of thumb that everybody simply applies is for each knockdown you deduct a point and so if I knock you down twice and I almost have you out, it can go to a 10-7 round,” Tessitore explained.)

He also called on more judges to score a “nondescript” round as 10-10, something you don’t see much.

Bottom line, just get it right. Step 1 is understanding the system, which hopefully this post helps with before Round 1 of fight No. 2.

“There are knowledgable sports fans, people I work with, who don’t understand how you actually score a fight. They literally talk as if at the end of the fight you sit back and say, ‘Yeah, I sort of liked it 115-113,'” Tessitore said. “That’s not how it works. You add these up, the score is submitted at the end of each round and it’s taken away from you, and then you add them up at the end and you have the score.”

It’s important to understand that each round counts exactly as 1/12th of a fight, he stressed, “12 independent chapters that we score.” And remember, as tempting as it may be: “You don’t get triple points for the 12th round.”

At this point, you’re probably wondering how Tessitore scored Deontay Wilder and Tyson Fury’s first bout. Tessitore had the fight 114-112 for Fury, but he doesn’t “wildly object” to the draw decision that came out, which kept both heavyweight fighters technically undefeated and champions in their own rights. It also (inadvertently, we’ll assume) made tomorrow’s rematch a must-watch.

Tessitore said he will “absolutely” be scoring this one while calling it from ringside, and now you can check his math.