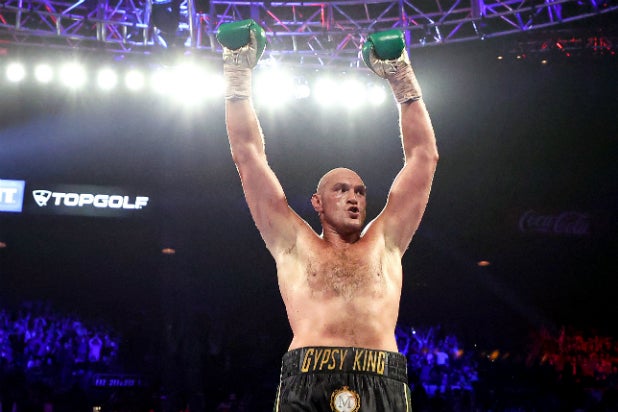 Tyson Fury defeated Deontay Wilder in their big Saturday night rematch by way of technical knockout in the seventh round. Fury is now the WBC Heavyweight Champion.

Fury was in command throughout the entire fight, even scoring multiple knockdowns against his dangerous opponent. Fury had one point deducted in the fifth, however, which also gave the reeling Wilder an extra couple of precious seconds to recover while in a heap of trouble.

The whole time, Wilder was looking to land one devastating right hand. He never came very close. Wilder’s own corner threw in the towel in Round 7, and the referee abided.

Wilder-Fury II took place at the MGM Grand Garden Arena in Las Vegas. “The Bronze Bomber” Wilder, an American, entered Saturday’s superfight as the WBC Heavyweight Champion with a record of 42-0-1. An incredible 41 of those wins came by way of knockout. “The Gypsy King” Fury, a Brit, came in as the lineal champion with a record of 29-0-1. Twenty of those wins came by knockout.

Only Fury remains undefeated, and now he’s got all of the titles that matter in the sport.

Back on Dec. 1, 2018, Wilder and Fury fought to a split decision draw. The general consensus, so much as one existed, was that Fury outboxed Wilder — but Wilder scored two key knockdowns of his opponent, including a big one in the final round. Fury made it back to his feet both times, though the Round 12 recovery sure cut it close.

The draw allowed both men to remain undefeated. It also certainly paved the way for tonight’s rematch, which was the most anticipated heavyweight boxing match in decades.

Saturday’s pay-per-view fight streamed on both ESPN+ and Fox Sports Go. Both services charged $79.99 for the event.

The prizefight was entertaining before its opening bell even dinged. Watch a pair of top-notch ring walks via the videos below.

The Bronze Bomber is seeing red before #WilderFury2

And finally, the moment it all ended (for now) for Wilder:

THE GYPSY KING IS THE KING OF BOXING! ????#WilderFury2 pic.twitter.com/3qDbApeXsH