Despite Devo and their philosophy of human devolution at the heart of this year’s Desert Daze, one thing is certain: the festival has absolutely evolved.

What began as a hot and dusty translation of L.A.’s psychedelic music scene over an 11-day period in 2011 has grown into a premium mid-sized fest with marquee talent drawing tens of thousands of people and catering to a variety of tastes under the common arch of innovative, outsider art.

“I see [this year’s lineup] as an extension of what we’ve already been doing,” Phil Pirrone said in an interview prior to the festival. “There’s some purists out there who think we’re a psych fest and we’re so much more than that.”

Sporting its most diverse lineup to date that saw more hip-hop, electronic and whatever music Pussy Riot is making these days, the festival on the banks of the water at Moreno Beach (better known as Lake Perris) showed plenty of vestigial improvements and enhancements in its DNA. Whether you were looking for details like more immersive art installations and improved food options for all diets, easier access getting in and out of the fest and better cell service, the improvements to the venue were noticeable. The latter was definitely appreciated given the concerns that local power outages stemming from the disaster of surrounding SoCal wildfires could have potentially impacted the festival. Not to mention last year’s torrential downpour that caused huge traffic delays and brought the fest to an early end on on Day 1.

Luckily, everything seemed to go ahead as planned as many Friday night festival-goers pulled into the grounds in time to catch sterling sets by Stereolab, Animal Collective and the Flaming Lips. These, and most of the other acts on the three-stage bill, each represented a different corner of the prism of psychedelic music that worked together throughout the weekend to bring us the vibe Pirrone was going for. That included his band JJUUJJUU, which welcomed people into the heart of Day 2 with their ritual of reverb-laden grooves on The Block stage.

Despite this being the biggest weekend of the year for the festival founder, not to mention one with new partners Red Light Management, JJUUJJUU’s set is always a must-see aspect of the fest for plenty of diehards who have followed the festival through several iterations and locations.

As night fell on Saturday, Devo fans sporting red Energy Dome hats peppered the crowd of The Moon stage prior to the 6:30 p.m. sundown, waiting for Mothersbaugh and company to rehash the best of their groundbreaking career on what was previously suspected to be the first stop on the band’s farewell tour. The set got off to a bit of a slow start as they chose to play a 25-minute opening mockumentary on Devo’s prepared comeback into pop culture. Though it was mostly amusing, it became a tiresome appetizer as fans waited patiently for the main course.

Finally, the band emerged in all black to a roaring crowd of mostly millennials to “Don’t Shoot (I’m A Man)” off 2010’s “Something For Everybody,” backed by an explosion of cartoon color. Conga lines of fans linked hands and dove into the scrum of the pit under a blanket of flashing stage light. 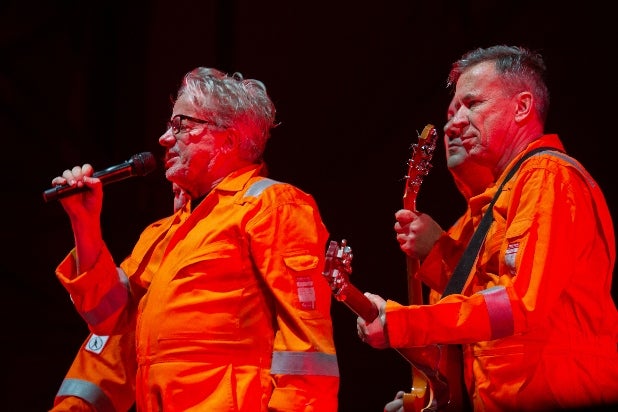 Before starting “Girl U Want,” the crowd roared when the band donned their iconic Energy Dome hats and “DEVO” band t-shirts as Mothersbaugh introduced the classic portion of the set to the audience. “Here’s a little ditty we’ve been working on,” the singer said as the band launched into an A+ performance of “Whip It.” All of the classic material from this portion of the set, including “Uncontrollable Urge” to 1980’s “Freedom of Choice,” felt as vital today as it did when the songs were first written.

Mothersbaugh, along with his brother/bandmate Bob and original bassist Gerald Casale, carried the torch well throughout the set for the band’s deceased members, including Gerald’s younger brother, multi-instrumentalist Bob Casale and drummer Alan Myers, whose presence still felt palpable through the hands of drummer Jeff Friedl and keyboardist and rhythm guitarist Josh Hager.

“Devo is about more than the guys on the stage, let’s see if we can keep it going after we’re gone…its still a beautiful world” Mothersbaugh said, before launching into the electro pulse of “Beautiful World” and donning the ever-iconic and creepy child mask to recreate the character known as “Booji Boy” and pulling handfuls of prized rubber bouncy balls from his fanny pack and chucking them playfully into the crowd.

Though the intent of the character since the ’70s has been to satirize infantile regression in Western culture, at the end of their triumphant set, it felt more like a symbol of them handing off a torch of counter culture to a younger generation, beckoning them to burn the system down and start again.

This energy felt like an ongoing theme for those paying attention to the crossover of the crowds between acts that seemingly had nothing to do with each other. You were just as likely to see the same person in the crowd dancing to the humorous, jam band genius of Ween and the galactic overload of Flying Lotus 3D. Though the music was much different than the guitar-driven antics of Gene and Dean Ween, FlyLo brought many fans of psych-rock into his world with an equally searing performance of a career-spanning cadre of celestial beats. Flames and lightning bolts shot into the crowd from behind his booth that looked like it was carved out of a chunk of the Death Star. 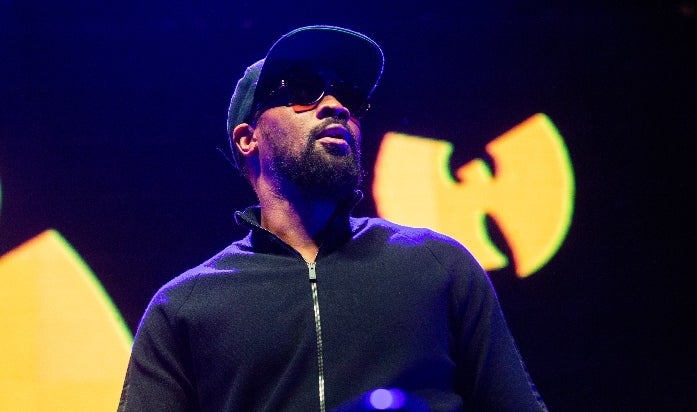 As people darted between The Block Stage, The Moon stage and the outlying Theater stage marked by a glowing wall of glitched-out old-school TV sets, the cross-pollination and shared influences among old and young musicians and their audiences felt fluid like the vital recirculating of energy toward a common goal of enjoying a long, strange trip.

The fest kept us floating into Day 3 on Sunday, touting Shaolin legends the Wu-Tang Clan. It was the first time a hip-hop headliner would take the stage at the festival and it probably won’t be the last. Even though the Wu is big enough to bombard the fest with its own separate fanbase who would camp out to hear (most) of the group, minus Ghostface Killah, Method Man and obviously the late ‘Ol Dirty Bastard whose parts and songs were done masterfully by his son, Young Dirty Bastard. Together the group performed a good portion of their breakthrough album “Enter the Wu-Tang (36 Chambers),” there was definitely room to make this show a special one ahead of its 25th-anniversary tour celebrating the album. The ability of Desert Daze to bring together artists like the Black Angels, Les Claypool and Khruangbin to share the spotlight is that there was the opportunity for some special moments with them on stage together.

The latter act had that exact career-defining moment when, after a set of serpentine, disco grooves and G-funk instrumental covers, the relatively of-the-moment Houston throwback-three-piece re-emerged on the Moon Stage to jam with the Wu on “Protect Ya Neck” as fans shouted lyrics to the hip-hop classic in the chilly night air. A performance by the newly-minted Khruang-Tang Clan felt like it was the perfect way to close out a fest that shows the past and present sharing the right energy to forge the future.