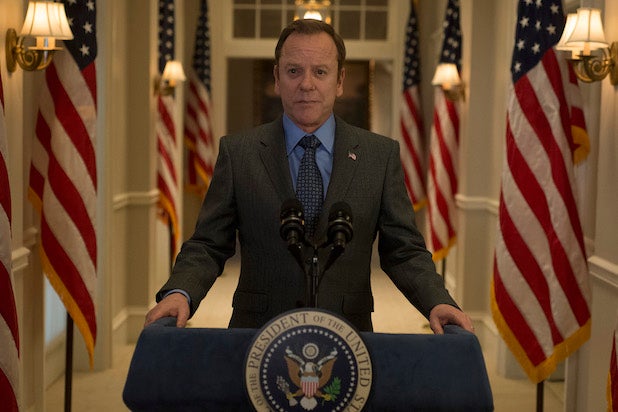 “Designated Survivor” may survive after all.

Netflix is in very early talks with producer eOne to get the Kiefer Sutherland-led drama picked up by the streaming service less than a week after it was canceled by ABC, an insider with knowledge of the discussion tells TheWrap.

The political thriller was one of many broadcast TV shows to get the ax last Friday during a pre-upfronts bloodbath, with the Disney-owned network also canceling “Ten Days in the Valley,” “Quantico,” “Alex, Inc.,” “The Crossing,” “Deception,” “Kevin (Probably) Saves the World,” and “Marvel’s Inhumans.”

To-date, the ongoing Season 2 has averaged a 1.6 rating among adults 18-49, which is the core demographic for broadcast primetime advertisers, which includes a week of delayed viewing for episodes old enough to tally. That puts it near the top of the list of highest-rated shows to be canceled for the 2018-19 season — so far.

The drama stars Sutherland as Tom Kirkman, a lower-level cabinet member who is suddenly appointed President of the United States after a catastrophic attack on the US Capitol during the State of the Union. Kirkman struggles to keep the country and his own family from falling apart, while navigating the highly-volatile political arena and while leading the search to find who is responsible for the attack.

“Designated Survivor” airs its Season 2 — and now series — finale Wednesday at 10/9 c on ABC. Unless it gets picked up by Netflix, or someone else, that is.