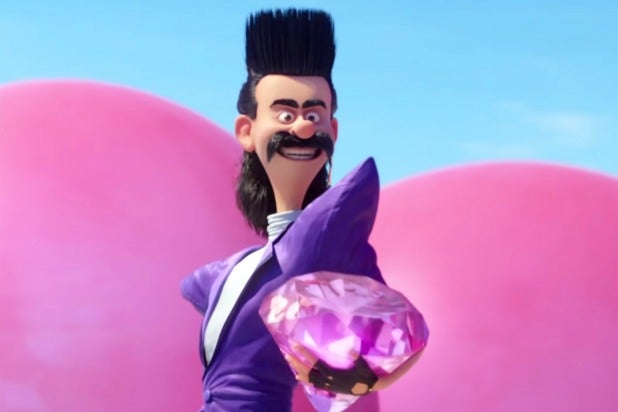 (Warning: Spoilers ahead for “Despicable Me 3”)

If you were puzzled by that Donald Trump lookalike during a key scene in “Despicable Me 3,” you’re not alone.

The animated film, which hit theaters Friday, introduces Balthazar Bratt (Trey Parker), a former child star who had a popular 1980s TV series called “Evil Bratt.” In his adult years, Bratt turns to world domination to ease the pain of no longer being cute enough to be on the small screen.

The mullet enthusiast tries to use his bubble gum-based weaponry to pilfer an enormous diamond on a cruise ship. But he is thwarted by everyone’s favorite madman-turned-secret agent, Gru (Steve Carell).

However, Bratt keeps his eyes on the prize. He disguises himself as a French gem inspector, who concocts a ruse about the diamond in Gru’s possession being a phony in order to ultimately swipe the stone for himself.

The most memorable part of the scene might be the fact that the gem inspector appears to be a Trump doppelganger. Case in point: The character is of large build, wears a red tie and has a very Trump-like hairdo, although he has a French accent and sounds nothing like the former “Celebrity Apprentice” host. (Sadly, the gem inspector doesn’t refer to the diamond as “yuge.”)

Why would the film opt to depict this character as a lookalike for the commander in chief? It’s unclear, and a Universal representative did not immediately respond to a request for comment. But perhaps it makes sense that Bratt, a former ’80s TV personality who values an extravagant lifestyle, would view Trump as something of a role model.

“Despicable Me 3” is currently in theaters.