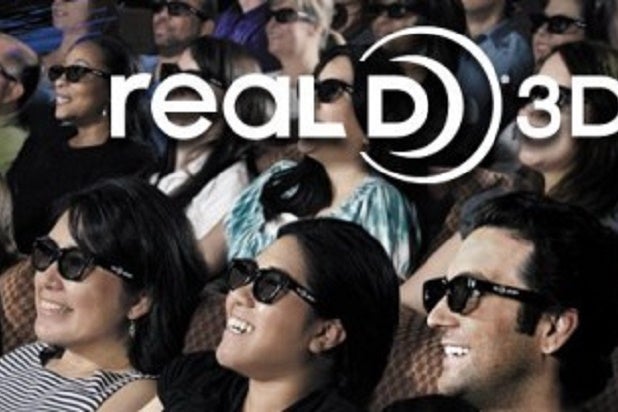 RealD may be up for sale after reporting an $11 million third-quarter loss, but ironically the future looks bright for 3D and the leading provider of the technology behind the format.

That’s because moviegoers will be wearing the red shades to get the maximum visual effect of the raft of blockbuster superhero epics and much anticipated sequels — nearly all in 3D — that is expected to drive a 2015 box office to a record $11 billion haul. With 2016 looking nearly as strong, analysts are convinced RealD and the format are about to put lackluster recent results in the rear-view mirror.

“The rest of the year is loaded with 3D films that are going to quiet a lot of the naysayers,” B. Riley analyst Eric Wold said. “Insurgent,” “Avengers: Age of Ultron,” “Jurassic World” and “Star Wars: The Force Awakens” are among the the 23 3D movies to be released this year.

An additional 23 3D movies are coming in 2016, including “Batman v. Superman” and a “Stars Wars” spin-off. And James Cameron is planning to release “Avatar” sequels every December between 2017 and 2019.

Though 3D’s popularity domestically has leveled off, industry analysts are convinced that will turn around thanks to the DC and Marvel characters about to hit the big screen in unprecedented numbers — roughly 25 superhero franchises will exist by 2020,

Also Read: ‘The Hunger Games: Mockingjay – Part 2′ to Be Released in IMAX 3D

The finale of the hit franchise and “Insurgent” are the first major young adult movies to be offered in 3D, and advocates believe the crowds lured by Katniss Everdeen and Kris Pryor open a new market sector.

Though domestic audiences’ passion for 3D and $3-$4 premiums leveled off last year, domestic results were strong for films like “Interstellar,” “Big Hero 6” and “The Hobbit: Battle of the Five Armies.” And overseas audiences showed they still a have huge appetite for the format with movies like “The Amazing Spider-Man 2.”

Thanks to that, RealD’s core business of supplying theaters with the technology and glasses for 3D looks solid, and its contracts with all the major theater chains are locked through 2018.

The Beverly Hills-based company put itself on the block a week ago, and the moves RealD has taken to position itself for a sale have made it an attractive target for buyers. The company isn’t talking, but it should be able to command top price — if it’s really selling.

Still, buying time, not finding the right suitor, is likely RealD’s intention in “exploring its “strategic options,” Wold said. The primary goal is to make the RealD board of directors’ November decision to turn down an unsolicited takeover offer from activist hedge fund Starboard Value look good to shareholders, he believes.

“I don’t think they want to sell, at least right now,” Wold said. “They’ve pushed the stock beyond the level of the Starboard offer and this would give them more time to continue that.”

New York-based Starboard Value, which holds roughly 10 percent of RealD’s shares, valued the 3D company’s shares at $12 in a $600 million bid and said would take the company private.

RealD stock has been rising since the recent earnings report, and Thursday it rose roughly two percent to $13.21. That’s in part because the down Q3 wasn’t as bad as analysts had expected, and was mainly due to collecting royalties on just five 3D films, compared to eight released in the same frame last year.

The shares are also up because RealD recently 20 percent cut in operating costs, scheduled more reductions and trimmed research and development projects.

RealD’s global screen count that rose to 26,500 last year, and about 20 percent of those are in China. The exhibition sector is exploding there and RealD is a partner with Dalian Wanda, which acquired U.S. theater chain AMC two years ago.

The Chinese firm is among several that may soon kick the tires of RealD, including its rival Dolby, IMAX, other deep-pocketed Asian interests and equity firms.