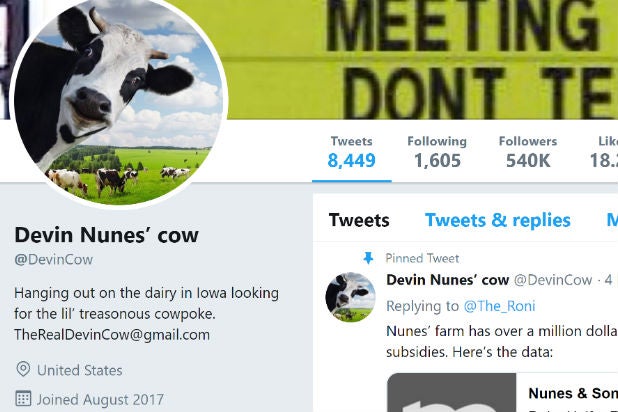 In his lawsuit filed Monday, Nunes, a Republican representing the state’s 22nd district, accused Twitter of censoring conservative voices and knowingly permitting abusive behavior. He is seeking $250 million in compensatory damages and $350,000 in punitive damages from the social media site, as well as several unnamed users.

One of those users is the creator of an account called “Devin Nunes’ Cow.” The profile, which frequently criticizes and mocks Nunes, had 1,000 followers at the time he filed the suit. Nunes’ lawsuit had the unintended consequence of drawing attention to it, and by Wednesday, the account had around 536,000 followers.

Currently, Nunes himself has around 396,000 followers.

In addition to the monetary damages, Nunes’ lawsuit seeks to compel Twitter to reveal the names of whomever is behind “Devin Nunes’ Cow,” and also accounts called “Devin Nunes’ Mom,” “Fire Devin Nunes” and “Devin Nunes Grapes.” He also wants the site to permanently suspend a number of users whose posts contain what he says are “false and defamatory statements.”