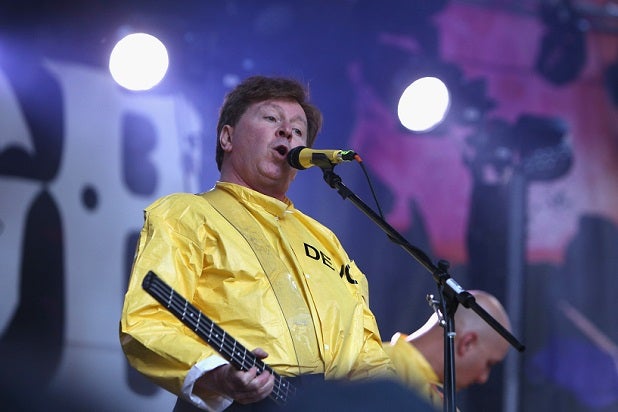 Most couples would probably think twice about scheduling their wedding for Sept. 11, given the tragic connotations of the date.

But Devo co-founder Jerry Casale not only tied the knot on Friday — he and his new bride Krista Napp actually held a 9/11-themed wedding reception, TMZ reports.

According to TMZ, the soiree of questionable taste took place at Michael’s Restaurant in Santa Monica, California. The bash was marked by a cake modeled after the twin towers of the World Trade Center, topped by images of the bride and groom.

The guests also received box cutters as party favors, while the table setting cards bore an image of a box cutter engraved with the happy couple’s names. What, no gingerbread men jumping from the sides of the cake?

During TMZ Live on Monday, Casale said that a friend of his got the cake and the place settings for him as a joke, thinking that the musician has a dark sense of humor, though Casale claims that the fact that he was getting married on 9/11 was a coincidence.

“One of the friends surprised me with the cake and the place settings and it’s because they thought it was really macabre that I was getting married on 9/11,” Casale said. “And I said no, it was just arbitrary.”

Casale and his new bride aren’t the only ones to have made high-profile, 9/11-related gaffes during the 14th anniversary of the terror attacks. Actress Melissa Joan Hart crassly shilled for her clothing line while criticizing the cable news networks’ coverage of the anniversary.

Meanwhile, former “Entourage” star Adrian Grenier caught heat for a tweet that honored civilians killed in the U.S. invasion of Iraq, as well as those who died in the Sept. 11, 2001 terror attacks.