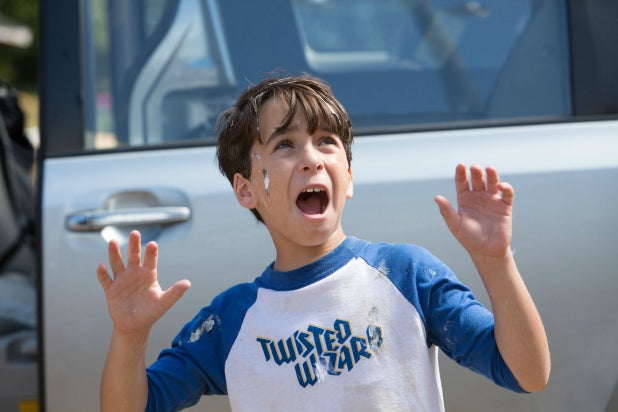 “Diary of a Wimpy Kid: The Long Haul”: Yup, the experience of watching this movie is right there in the title. Unconscionably overlong while offensively appealing to the lowest denominator of filmgoers, this film would appear to lack a single reason to exist.

It’s been five years since the “Diary” trilogy came to a close with “Dog Days” — a touching finale of a franchise written by the versatile Maya Forbes (“Infinitely Polar Bear,” “Monsters vs. Aliens”). The book had seemed to be literally closed on this one. And for good reason. Compelling artistry always knows where (and when) to resign.

Despite the writing on the wall suggesting that the series be discontinued (each of the three previous “Diary” movies made less than its predecessor), Fox has decided to give it another go. What’s worse, a majority of the people that made those earlier adaptations of the beloved preteen books did not return to reprise their roles.

“Long Haul” ostensibly picks up a year after where “Dog Days” left off. As the 90th birthday of their grandmother approaches, Greg (Jason Drucker) and his brother Rodrick (Charlie Wright) suggest they all go on a cross-country road trip. They claim to want to visit their aging grandmother. Mom Susan (Alicia Silverstone) and Dad Frank (Tom Everett Scott) love the idea. Susan believes it will be a perfect opportunity to get in some family bonding. Frank supports the plan enough, despite not being able to get off work.

Of course, the teenage boys have ulterior motives. En route to visiting grandma, Greg and Rodrick concoct a scheme to make a surreptitious detour to a video game convention. There, Greg hopes to meet up with a famous YouTube gamer, an adult man who has made a lucrative living eating Cheetos and live-streaming his gameplay. This is the type of absurdly specific detail in “Long Haul” designed to capture the attention of a younger audience.

There is more plot to director David Bowers’ film. Hell, it’s essentially all plot. The jokes come in the form of standard pee-and-poop gags. There’s also a classic projectile vomit sequence. Oh, and a little piggy destined to make trouble for the Heffley family.

But what of the film’s moral and intellectual principles? “The Diary of a Wimpy Kid” franchise has always prided itself on poignancy. The books — and, by extension, the first three films — do not revolve around popular athletes or sprightly cheerleaders. They’ve derived their power (and heart) by focusing on the outsider. The smart, precocious kid who understands the strange, shifting universes around him, but can’t fit into any of them. Underneath the pimples and hormones, teenage-hood is complex. It always has been. Author Jeff Kinney understood this. “Long Haul” does not.

What’s perplexing is that Kinney (with the help of Bowers) assisted with the movie’s screenplay. However, none of the aforementioned virtues of the “Diary” series came along for the ride. There are several vexing and infuriating turns in “Long Haul,” but perhaps none more so than the archaic family dynamics.

Susan is the controlling mother who just wants her family to embrace an “unplugged” road trip, with no cell phones and no computers. Interactions must be human, not digital. Everyone in their mini-van scoffs at this concept. She insists, “No Instagram! No Snappy-Chatty!” (You know a movie is tapped into the modern vernacular when you’re writing unfunny variations on Snapchat.)

The problem isn’t that Susan is overbearing; it’s that she’s only overbearing. Kinney and Bowers give Silverstone no other character trait to play, and this one-note-ness is true of all the characters. Frank appeases Susan, but then secretly whips out his computer in the middle of the night. He’s the cool dad. Rodrick has long black streaks of hair and jams out to rock ‘n’ roll. (Don’t you see his Avenge Sevenfold t-shirt?!) The Heffley family also has an infant baby named Rowley. The child cries except when it has its pacifier. Even Greg, our protagonist, has one theme on which to play slight variations: charming and crafty.

It’s probably unwise to expect studio fare to challenge traditional gender roles, or long-standing power structures between parents and their offspring. Basic movies are basic movies. And it’s also clear that adults are not the film’s target demographic. “Diary of a Wimpy Kid: Long Haul” was created for my younger brothers, and probably yours. But you know what? There’s not a bone in my body that believes I should show them this movie.

Fox has cleverly marketed this hackneyed yarn to kids who find themselves in the throes of the digital revolution: YouTube and Twitch-crazed pubescents who spend their days, or shine, tucked away in their rooms, black-out curtains in full effect, playing Minecraft until their battered irises need a break. Parents will find Greg and Rodrick to be appalling; they’ll bemoan the state of youth, a faction disinterested in exploring outside. Kids who’d rather spend their time talking on a headset with their internet friends then playing baseball in the street with their classmates.

These myopic, didactic complaints arrive en masse with each passing generation that diverges from what we once knew. The truth is, and the older “Diary” films understood this: there is not a right or wrong way to be a kid. One day you just are. Until you’re not.

“Long Haul” wasn’t written, financed and distributed to reinvent the wheel. It just would’ve been appreciated if someone was at least at the wheel.