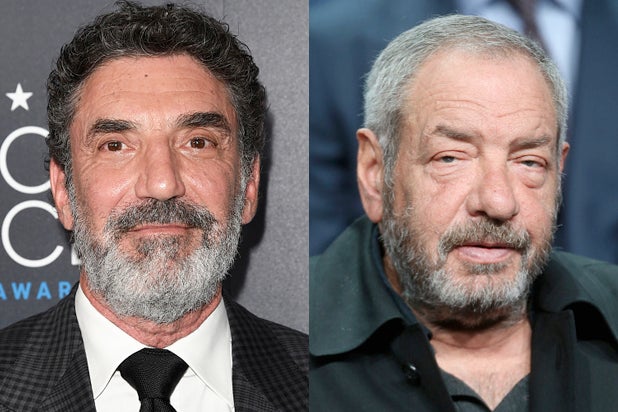 Beverly Hills, Calif. — Chuck Lorre revealed Monday how he dealt with being fired as showrunner in the ’90s from CBS sitcom “Cybill” after clashing with the show’s titular star, Cybill Shepherd.

Lorre, the creator and executive producer of TV comedies such as “Two and a Half Men,” “The Big Bang Theory” and “Mom”  appeared onstage at the Beverly Hilton Hotel Wednesday for the Hollywood Radio and Television Society’s Newsmaker Luncheon. He was joined by Dick Wolf, creator of NBC’s “Law & Order” and “Chicago” franchises, and moderator Warren Littlefield, former president of NBC Entertainment.

Littlefield opened the session by asking what Lorre and Wolf learned early in their careers from being fired — Lorre by Shepherd, Wolf by “Miami Vice” star Don Johnson.

“As with many things in life, Don arranging my departure was actually a huge favor, because it meant creating my own shows,” Wolf said. He added, “To prove time heals all wounds, I had a big Christmas party on Saturday, and Don was there.”

Asked whether Johnson had ever apologized for having Wolf canned from his gig as a staff writer on “Miami Vice,” Wolf said that he did not, saying the prospect “would be kind of like Donald Trump apologizing.”

Wolf and Lorre also addressed shifting trends in the television industry. Littlefield noted that the premise for CBS’ “Mom” — about a recovering alcoholic trying to put her life back together — sounds more like that of a cable show than a broadcast comedy.

He also recalled something that producer Marcy Carsey, his former boss, once told him regarding television networks: “We put the stuff on the trucks. Any truck will do.” He said that lesson applies now to the differences between creating shows for broadcast, cable and streaming platforms.

Wolf talked about how his shows have evolved to fit programming trends. He noted that “Chicago Fire” was pitched as a serialized soap opera.

“Four years ago everybody thought everything had to be heavily serialized to accommodate binge viewing,” Wolf said. He noted that “Fire” is now far less serialized than ever and is, like his classic “Law & Order procedurals, primarily episodic.

“If the writing is good, people are perfectly happy to watch a self-contained hour,” he said. “And I think tastes are drifting back toward more procedurals, which is a word that I didn’t know existed 20, 25 years ago.”