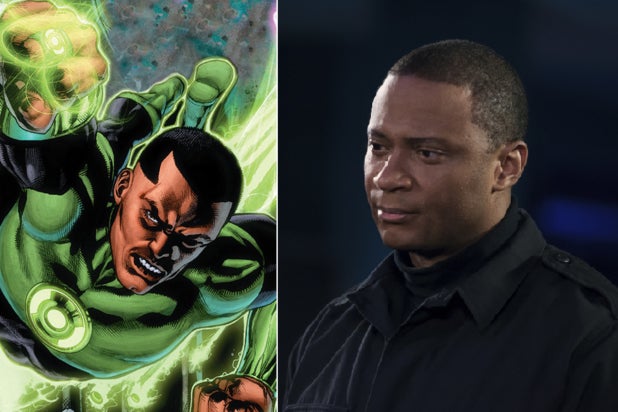 DC Entertainment/Diyah Pera for The CW

Is the Green Lantern headed to The CW’s “Arrowverse?”

A throwaway line at the end of Monday’s “Arrow” alludes to a popular fan theory surrounding John Diggle (David Ramsey), when John Wesley Shipp — playing his 1990s-era version of Barry Allen/The Flash, who travels from an alternate universe — asks Diggle why he’s not wearing a certain special ring.

For fans of “Arrow,” the line was a nod to a popular fan theory that’s been floating around for years, that argues Diggle — a character created specifically for the TV show — will be the “Arrowverse” version of John Stewart’s Green Lantern. Ramsey himself has spoken about it, though CW brass has shot that idea down on numerous occasions. The ring that Shipp’s Allen is referring to is, of course, the same ring that The Green Lantern wears, which gives him all of his special abilities.

Also Read: ABC Is Developing a Sorority Girl CIA Drama Based on the Real-Life Story of Tracey Walder

But now, at least in the universe where Shipp’s Flash resides, John Diggle appears to be, in fact, the intergalactic superhero. But “Arrow” showrunner Beth Schwartz said that doesn’t necessarily mean the Diggle in the prime “Arrowverse” universe will join the Green Lantern Corps. After all, Diggle does have an alter-ego crimefighter alias he goes by in Spartan.

On if Shipp’s line is a tease of what’s to come, Schwartz told reporters during a screening of the first two episodes of the crossover on Friday, “To be continued. We’re all really excited about that, I’m not sure what’s to come of that… it’s not been written yet.”