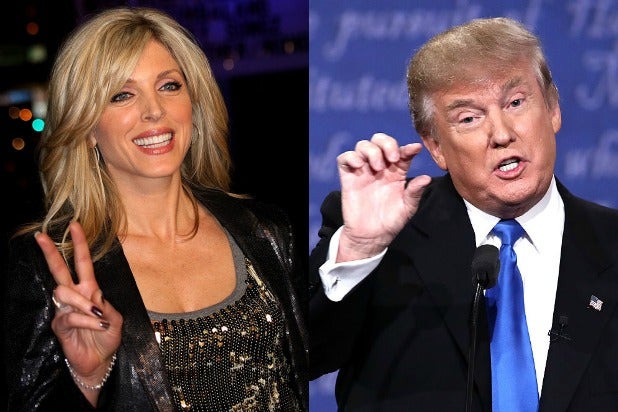 Could Marla Maples be the mysterious figure behind the Donald Trump tax returns?

After the The New York Times reported that Donald Trump took a $916 million loss on his 1995 tax return over the weekend, which would have allowed him to pay zero federal taxes for 18 years, people immediately began guessing who might have sent the paper the tax records. (The Times’ Susanne Craig says they showed up in her mailbox.)

Journalist Yashar Ali is among those who believe they may have been given to the Times by Maples, who was married to Trump from 1993 to 1999. We know she had access to Trump’s records from New Jersey, because she signed them:

As Ali pointed out in a post on Medium, the Times’ report did not mention whether paper contacted Maples for the story — even though reporters held off on publishing the returns for ten days until they were able to verify their authenticity. They went as far as hiring tax experts to analyze the returns, seeking comment from the Trump campaign, and even contacting the accountant who signed the documents.

It’s odd that the Times article did not mention whether reporters actually contacted Maples, since she would be an obvious person to contact for comment on whether the documents were authentic. (The Times did not respond to a request for comment from TheWrap on whether the paper reached out to Maples.)

Back in 1999, right as The Donald was considering his first presidential bid as a Reform Party candidate, Maples told the New York Post that “if he’s serious about being president and runs in the general election next year, I will not be silent.”

Also Read: Trump Tax Records Show 'He Could Have Paid No Taxes' for 18 Years, Says NYT

She added, “I will feel it’s my duty to tell the American people what he is really like.”

TheWrap has reached out to Maples to see what she wanted to share with the American people. We did not hear back.

Then there’s this. After Trump began bringing up Bill Clinton’s infidelity, Hillary Clinton supporters and others noted that Trump had cheated on his first wife, Ivana Trump, with Maples. That brought Maples back into the news.

The Daily Beast’s Olivia Nuzzi noted that on Sunday, Maples, who practices Kabbalah, engaged in a curious Twitter exchange celebrating the arrival of a new season. She wrote: “#FallLove Breathe it in as if 2day’s the first day of your life. The kabbalist’s say 2nite Adam&Eve were created. S…”

Politico’s Marc Caputo responded with a joke, saying she was serving “up a cold plate of revenge.” PolicalBuffs then replied to both of them, saying: “wow. How do u know abt those stuff?

Maples quickly shot back tweeting back, “A lot of studying & an open mind to learn.”

She did not deny serving up revenge.

#FallLove Breathe it in as if 2day's the first day of your life. The kabbalist's say 2nite Adam&Eve were created. S… https://t.co/8OClFyMDw9