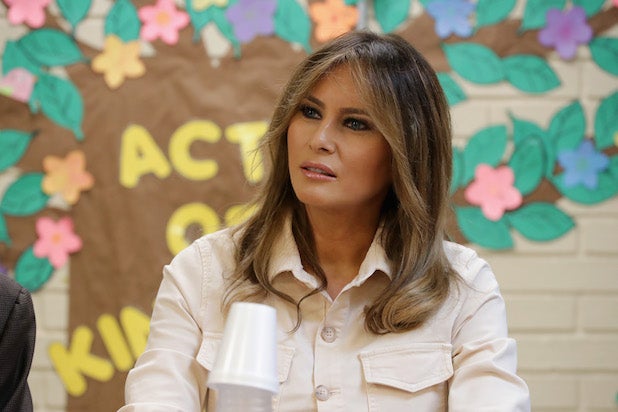 Melania Trump’s choice of jacket sparked a groundswell of backlash as she visited the U.S.-Mexico border on Thursday.

Before her flight to Texas, Melania Trump was seen wearing a Zara jacket with the words “I really don’t care, do u?” emblazoned on the back, as initially reported by the Daily Mail. By the time she arrived, the first lady had changed jackets, but the damage was already done and fervor over the wardrobe quickly swept social media.

“Thank you for your refreshing honesty,” former federal ethics chief Walter Shaub said in a tweet. Several others chimed in with shock and criticism, some wondering aloud whether Trump was indirectly responding to the many vocal detractors of President Donald Trump’s recent policy that separated children from their families at the border.

The first lady’s spokeswoman Stephanie Grisham said there was no message being sent at all, according to ABC reporter Meredith McGraw. “It’s a jacket. There was no hidden message. After today’s important visit to Texas, I hope this isn’t what the media is going to choose to focus on,” Grisham said.

NEW: @FLOTUS spokeswoman Stephanie Grisham when asked what message the first lady’s jacket intends to send: “It’s a jacket. There was no hidden message. After today’s important visit to Texas, I hope this isn’t what the media is going to choose to focus on.”

“I REALLY DON’T CARE, DO U?” written on the back of Melania’s jacket, refers to the Fake News Media. Melania has learned how dishonest they are, and she truly no longer cares!

“She wanted to see everything for herself,” Grisham continued. “She told her staff she wanted to go and we made that happen.”

See reactions below to both her visit to Upbring and her wardrobe choice for the flight.

I mean let’s face it, she doesn’t. #PhotoOP
“Melania Trump made quite the sartorial statement on Thursday when she donned a jacket with the words, 'I REALLY DON'T CARE, DO U?' written across the back while boarding a plane to visit immigrant children being held at the border…” pic.twitter.com/DsAf9HVlQO

There's a difference between BEING PRESENT and SHOWING UP. Melania, you're at the border physically – but you're in a cage emotionally. https://t.co/QaqxGhPqCC

I think we were undervaluing pictures when we said they were worth 1000 words. This is Melania Trump wearing a jacket that says "I Really Don't Care, Do U?" pic.twitter.com/pqPRemmuCb

Did @flotus pull another fashion gaslighting on the country?

After "grab em by the" … she wore a pussy bow blouse to the debate.

The jacket Melania Trump wore today as she boarded the plane said in large print on the back, "I really don't care, do u?" pic.twitter.com/3KVxbUOxXZ

Melania wears a jacket to visit kidnapped migrant children that says "I really don't care, do you?"

The jacket that FLOTUS had on as she boarded the plane for Texas: a $39 Zara military jacket that said in large print on the back, "I really don't care, do u?" https://t.co/kNYAIGcdlm

THIS PHOTO OP PRESS CONFERENCE IS A LOAD OF CRAP!
THIS IS THE BIGGEST FLIM FLAM CON JOB! SHAME ON EVERYONE INVOLVED!
NO TALK ABOUT HOW THEY'RE GOING TO RETURN KIDS WHOSE PARENTS HAVE BEEN DEPORTED. NO EXPLANATION OF HOW IDENTITIES ARE RECORDED AND THEIR PARENTS ARE TRACKED.

Yes, Melania is the crisis actor.

These kids don’t need Melania Trump, they need their parents.

Let’s focus on that, not on a publicity stunt by the White House.

Where are the babies and the girls? If @FLOTUS demands open access to them, then she's been helpful. Otherwise she just making these children's situation worse by spreading propaganda.

Melania is whitewashing this scandal for good PR.

You want an example of a crisis actor?
Look at Melania Trump.
This is nothing but a publicity stunt.
If she really cared about these kids, she would talk to her husband and work on better immigration reform.
She hasn’t.

Melania Trump just visited a CHILD INTERNMENT CAMP and turned it into a fucking photo-op for her husband who is guilty of kidnapping and abusing children. These people (the Trumps) have no soul.

|@FLOTUS THANK YOU for showing up and asking how these children will be reunited with their families! Please help find the girls and babies.

@chrislhayes @maddow @NicolleDWallace @Lawrence PLEASE FOCUS ON WHY MELANIA DID NOT VISIT GIRLS AND INFANTS! Her visit was useless and self-serving

I have some questions. https://t.co/qkBwjyQ6s9