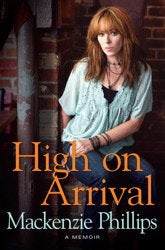 In it, the 49-year-old Phillips reveals, among other sickening details of her drug-fueled childhood, that she slept with her father. Phillips says he raped her on the eve of her marriage to when she was 19. The sexual relationship — which occurred over a 10-year span — later became "consensual," she said.

People magazine probably thought it had a coup when it scored the rights to publish an exclusive excerpt from the book. The magazine hit newsstands Thursday, and People posted a story about the excerpt on its website on Tuesday evening ("Mackenzie Phillips: I Slept with My Own Father").

But Oprah’s interview with Phillips, part one of which aired Wednesday, took full credit for the revelation. Check out Oprah’s own teaser for the episode:


Phillips recounted an affair with Mick Jagger, as well as the first time her father – who died in 2001 – shot her up with cocaine.

Oprah posted its own excerpt from the book on its website Wednesday.

And as Mackenzie Phillips shot up the Google and Twitter trends yesterday, the newsworthiness of People’s began to sink faster than a junkie in beanbag chair.

Then on Thursday, just as People’s excerpt was hitting newsstands, Phillips appeared (twice) on NBC’s “Today” for a sit-down with Meredith Vieira and Al Roker (two segments – a total of 23 minutes!), and – you guessed it – an excerpt from “High on Arrival” was posted on the “Today” show site.

The air, you might say, was out of the black balloon.

All of which begs a recurring question: what constitutes an “exclusive” or an “embargo” anymore?

I asked the publicist at Simon & Schuster, the publisher of “High on Arrival,” what the point of giving an exclusive excerpt to People if Oprah was going to take it and run?

She said that People was given second serial rights – read: non-“exclusive” — since the book was published on Wednesday, before People’s excerpt.

Except that People appeared to bend those rights by publishing its story on the Web on Tuesday.

I asked Sarah Weinman, a blogger who covers the book publishing industry at Confessions of an Idiosyncratic Mind, about the whole murky enterprise of book embargoes.

“I’m not a fan of embargoes, as a trawl through my Twitter feed will attest,” Weinman said. “But the point was always to drum up interest in the work, and cumulatively, both People and Oprah have certainly done so.

Weinman added that excerpts from Dan Brown’s novel “The Lost Symbol” were usurped by a book review.

“Parade in the U.S. and Mail on Sunday in the U.K. had "exclusive" first serial rights to the prologue and first chapter,” Weinman said. “But Janet Maslin’s review appeared Sunday the 13th, and voila, the embargo was broken. Did it matter? Probably not, but it goes to show that even when something is exclusive, geolocation can upset good intentions, too.”