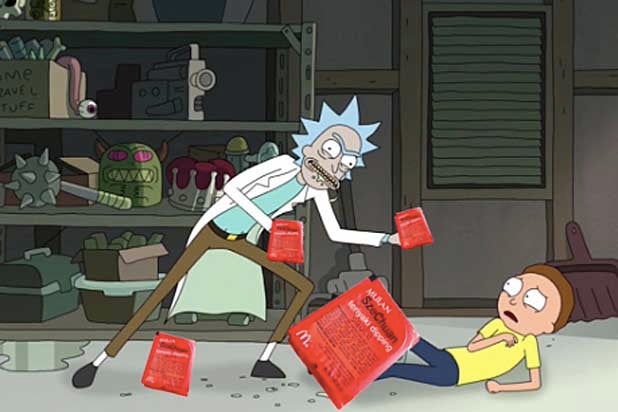 Still craving McDonald’s Szechuan dipping sauce on your McNuggets 20 years after it was retired? You may be in luck.

Adult Swim’s “Rick and Morty” has sparked a campaign to bring back the sweet and tangy fast food indulgence after it was featured on the previously-unannounced Season 3 premiere on Saturday.

In the surprise installment of the cult animated series, Rick Sanchez (an eccentric, alcoholic scientist voiced by Justin Roiland) declared that his personal goal was to get his hands on the discontinued sauce, which debuted as a promotional condiment for the 1998 Disney film, “Mulan.”

@RickandMorty "Even if it takes me 9 seasons morty! This is all about the szechuan sauce morty! #rickAndMorty #szechuansauce pic.twitter.com/L01frzK5MN

Obviously a closet McDonald’s fanatic, Roiland also shared the link for a Change.org petition to persuade the Golden Arches to revive Szechuan sauce.

Help make this happen. Not like there's anything more important to worry about https://t.co/bkln8DllsX

“I want Szeshuan dipping sauce for the Mcnugget, which hasn’t been in production since 1998, and I need it to happen soon,” the site description created by Gabriel Cohen says. “And with the rise in people knowing about it, and the new ‘Mulan’ movie coming out, it would be a travesty for Mcdonalds not to take advantage of this amazing opportunity to not only cater to fans of flavor, but also to the millions of people who want to relive the experience of the Mcdonalds Szeschuan dipping sauce that they remember.”

Roiland’s plea even touched “Rick and Morty” fans who are too young to remember the addictive sauce — but are now desperate to try it.

Fortunately the viral message also reached the ears of a McDonald’s chef, who tweeted back: “I’ll see what I can do.”

Disney’s live-action “Mulan” adaptation is set to hit theaters in 2018. Your move, McDonald’s.

To get you fast food fanatics salivating while you wait for the chain to revive the sauce, watch the original commercial below.

The studio is raiding its vault to remake classics including “Mulan”