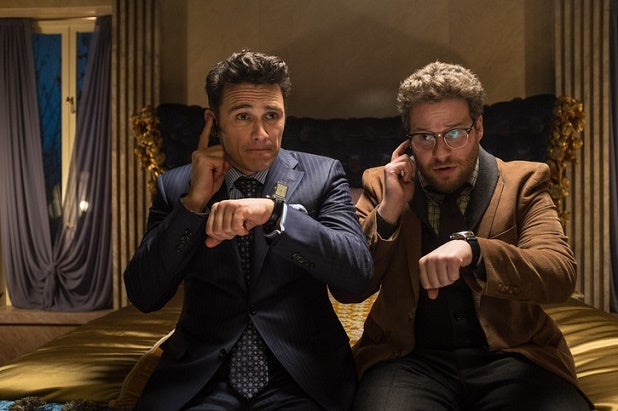 On Sunday, Sony internet technicians were still wrestling with the fallout from a paralyzing hacker attack the previous Monday that left the computer, email and phone systems at the TV and movie studio inoperable. Sony has hired FireEye Inc’s Mandiant forensics unit to help clean it up, it was revealed Sunday.

A group calling itself Guardians of Peace claimed responsibility for the attack and threatened to release sensitive corporate data. But Sony has not identified the source of the takedown, according to an individual with knowledge of the situation.

Among the theories investigators are checking is that North Korea, or someone operating on its behalf, launched the cyber attack in retribution for “The Interview,” another knowledgeable individual told TheWrap. The upcoming Sony comedy film features Rogen and Franco as journalists who land an interview with reclusive North Korean leader Kim Jong-Un, and are then asked by the CIA to assassinate him.

No one at the studio was talking Sunday, but North Korean officials have made clear their opposition to the film, which is to open in U.S. on Dec. 25.

In a letter written to U.N. Secretary-General Ban Ki-moon, North Korea’s U.N. Ambassador Ja Song Nam accused the United States of sponsoring terrorism and committing an act of war by allowing the production and distribution of “The Interview.”

“To allow the production and distribution of such a film on the assassination of an incumbent head of a sovereign state should be regarded as the most undisguised sponsoring of terrorism as well as an act of war,” Ja wrote in June. In addition, KCNA, the official news agency in North Korea, quoted a Foreign Ministry spokesman in June as promising a “merciless counter-measure” if the film is released.

The attack by the self-designated “Guardians of Peace” — or #GOP — has been brutally personal. Some PC computer screens at Sony showed a shocking image of the heads of studio CEO Michael Lynton and co-chairman Amy Pascal on a platter with scales of justice. Some of the hacked Twitter files show similar images of Lynton and Pascal.

But the aims of the hacker or hackers have been entirely unclear, with no specific demand following the threat to “release damaging information” by a certain time, according to one Sony insider. That deadline passed with no information released.

At least five new movies from Sony Pictures were posted to copyright-infringing file-sharing hubs online soon after the attack. The Brad Pitt World War II movie “Fury”and four upcoming movies including “Annie” — a high-profile musical set for a Dec. 19 opening — are among the pirated films now available. However, there is no proof that the films’ postings are related to the hack.

Other working theories at the studio involve a disgruntled ex-employee, as Sony Pictures has laid off hundreds of people this year under pressure to streamline the organization. In an email responding to inquiries from The Verge, a person identifying as one of the hackers wrote, “We Want equality [sic]. Sony doesn’t. It’s an upward battle.” And in a follow-up email, a hacker who identified as “lena” wrote: “Sony doesn’t lock their doors, physically, so we worked with other staff with similar interests to get in… Im sorry I can’t say more, safety for our team is important [sic].”

What if Kim Jong-un is behind the #GOP hack as retaliation for #TheInterviewMovie? http://t.co/EcPhPRgBa2